I’m going on holiday!! I’m fully aware that at the moment the blog is kind of a little bit full of ... ‘filler’ posts I guess, and that’s not going to change for at least the next couple of weeks I’m afraid. I will be continuing with the weekly list feature I started last week, purely because I love lists and it’s a great way to have loads of lists in one place, just in case I ever need inspiration on what to read/buy and have run out of ideas. Unlikely, I know, but I like to be prepared.


So anyway. I’ve been reading tons but not finishing anything for ages now. I don’t know what it is, but I guess I’m just feeling a little bit down round the edges at the moment (for no real reason, just a little bit of feeling unsettled what with impending going back to work part time and my first craft fair that I’m epically unprepared for and Benji’s first birthday in October as well as some other ongoing and perpetually rubbish family crap..) and I’m finding it difficult to really pay attention to books. I’m reading The Girl who Fell Beneath Fairyland and Led the Revels There by Catherynne M. Valente. It’s the sequel to The Girl who Circumnavigated Fairyland in a Ship of Her Own Making, which I read at exactly this time last year, while I was on holiday in our friends’ house in Devon, exactly as I’m going to be in a couple of days, so it feels fitting, and I’m loving it so far but even so I’m not settled in it. I’m not getting that thing where you just can’t wait to read at every possible available moment, even while walking around, or during like five minute coffee breaks and such. I haven’t had that for a while. I may need to re-read some Harry Potter to get me back in the mood for awesomeness.


There will be a few scheduled posts going up while I’m away, and hopefully the countryside will rejuvenate me and give me loads of time to read as we’re going away with my parents and sister so I should have some time to myself as well as lots of lovely time with my lovely boys J Maybe I’ll come back having written loads of reviews. Hopefully. I’ll have no internet access while we’re away, so I couldn’t post even if I wanted to, but I’m hoping once we’re back we’ll be able to sort out our home internet issues and get it back so I can get back into the blog. As I’ve said so many times in the past year, I miss it, and I’ve been crap at commenting and replying to comments lately so I just want those of you who comment to know that I read them and appreciate them and quite a lot of the time even write out replies on my silly touch keypad on my phone and then it refuses to let me post them, or my browser stops working or some such thing and I go and sulk in the corner instead. So. You are appreciated J
The most important thing- selection of the holiday books! I hadn't even thought about what to take until a couple of days ago, but it was actually easy. Here's what I picked: 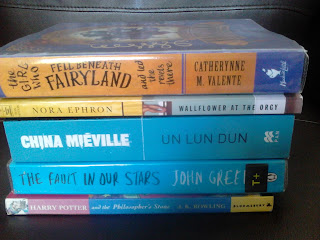 The Girl Who Fell Beneath Fairyland and Led the Revels There by Catherynne M. Valente is a library book that I happened upon by chance last time I was there, and coupled with The Fault in Our Stars compelled me to break my library ban.  The other night I was feeling a bit down and so I turned to ever faithful Harry Potter and the Philosopher's Stone for solace, so it's along for the ride in case the blues hit again. Then I'm in the middle of Wallflower at the Orgy by Nora Ephron which I'm reading slowly because it's a collection of articles and essays and it's funny and great, as Nora usually is, and finally Un Lun Dun by China Mieville which I got from Charlotte for the Ninja Book Swap and I cannot wait to start. I'm hoping I'll get the chance!


Speaking of the Ninja Book Swap, I’m super excited that I’ve been reading such great things about people’s experiences of it! I loved both sending and receiving presents every bit as much as I thought I would and I really want to do it again, soon! It was open to everyone from everywhere to send all kinds of lovely presents, and books both second hand and new and you can read about what various people got and sent here, here and here, and about my experiences of the swap are here. I seriously want to run it again and am looking to find out what interest levels would be for it, so let me know if it's something you'd want to be part of!


That’s about it, I think, so enjoy my posts full of lists while I’m gone, and I’ll see you all, renewed and full of reviews, at the end of the month! Happy July everybody!
Posted by anarmchairbythesea at 18:37