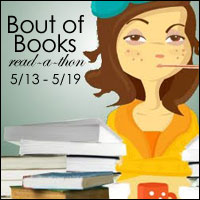 The master post thing kind of stopped working for me today. I figured if I was getting bored scrolling through all the other days, everyone else probably was to, so I'm going to do a post per day from now on!

Yesterday was slightly less successful than Monday, but I'm not going to let it deter me! I still have the end of the craft cupboard revamp project to get on with, and Benji and I are taking a trip to the Farmers' Market later to get some things (which may or may not include a cupcake...) and I will probably get caught up in knitting teeny tiny hats for premature babies again, but that aside, The Art of Fielding is getting really good and I'd like to get settled down and read at least another few chapters today!

Pages Read: 122
Books Read From: The Art of Fielding by Chad Harbach
Books Finished: Laura's Handmade Life by Amanda Addison
Blogs Visited: Among Stories, and then the usual suspects.
Snacks Consumed: a cupcake, which was awesome, and then Rhys brought me a pain au chocolat when he came home which was also awesome. 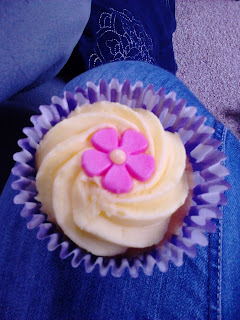 lemon cupcake with a flower on. Made of win.

Today's definitely been better than yesterday which is pretty much down to the fact that all I've done since dinner is lie on the sofa and read. I didn't get hardly any reading in before Benji went to bed as he rolls so much now that I take my eyes off him to read a paragraph and he's like, across the other side of the room, upside down, in a drawer or something. (Just to clarify, this has never happened so far, but the other day he was nearly under the table in approximately five seconds of not looking at him) So anyway, during hours of daylight much attention must be paid to the baby which means lots of knitting (which I can do without looking at it), but not much reading :-( Anyway! The cupcake I bought myself earlier was awesome and The Art of Fielding is, as expected, getting better and better. I might squeeze in a few more pages before bed and hopefully some more in the morning as Rhys doesn't start work till about midday and he likes to hang out with Benji when he's here in the mornings!

Also, why is eating a cupcake so much more awesome than having just a slice of a big cake? I love cake in all its forms but there's just something extra satisfying about cupcakes and I can't work out what it is.