I think I've been pretty good at not talking about baby stuff too much here.. I don't know if it counts as I haven't really been talking about anything much at all on the blog lately, but still I'm proud of myself! However, today I have caved, and am going to give a very brief baby update. Currently I'm 18 weeks pregnant, which means I'm nearly half way through! :-/ I've had to get some maternity trousers and am looking like a proper fat person, rather than a pregnant one. A couple of weeks ago we heard the baby's heartbeat for the first time which was amazing, and in two weeks we'll have our next scan and can hopefully find out if we're having a boy or a girl!

However, the major point of the post is really to chronicle the beginnings of baby's library :-) We haven't bought anything at all for it yet other than books - we've been given some clothes and a car seat, but the baby shopping proper has yet to start, and while I'm not particularly bothered by the fact that we've not really looked at cots or prams, I am daily finding more books which I absolutely must get for it. I just have to add at this point that none of these books so far are the sensible cardboard, chew resistant type of book. They're all the pretty paper ones, which you're probably not meant to get the kid till much later but ah well. What can you do? I see books, I must buy. That's the way the world goes, and as I have another 4.5 months or so of the baby book buying, I decided to turn it into a semi regular feature.

So, here's my first picture! 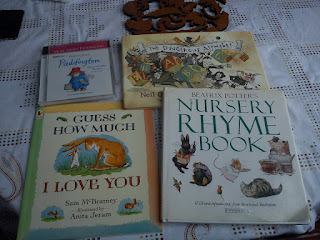 Please excuse the tablecloth and the awful photography. What is here so far:
The last one will definitely not be suitable for a while, but it's so pretty and awesome I couldn't resist! I used to read Guess How Much I Love You to my little brother and have cuddles, so it was definitely an essential :-) I'm on the look out for Where the Wild Things Are by the late, great, Maurice Sendak, The Very Hungry Caterpillar by Eric Carle, and We're Going on a Bear Hunt by Michael Rosen.


One of the greatest things about browsing the picture books is that you get to rediscover brilliant stuff you'd totally forgotten about, which is why I keep finding so many more books I need! What picture books did you love as a child? Help my baby library wishlist out! :-)
Posted by anarmchairbythesea at 16:24