As some of you may be aware, I'm still kind of on hiatus from the blog at the moment but I signed up for the Autism Awareness Giveaway Hop way back and I didn't want to miss participating for the second year. Last year the hop was brilliant, with loads of blogs promoting autism awareness and giving away related gifts. Autism awareness has always been really important to me, as both myself and my mother have worked fairly extensively with autistic children in the past, and I have seen how totally intolerant people can be towards something they just don't understand. Also what with being pregnant this year it's become even more important to me to spread awareness, as I've been thinking about the future and the kind of world that I want my child to grow up in. 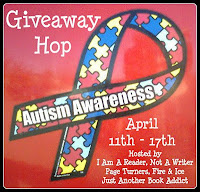 In the interest of spreading awareness, here is a brief explanation of what autism is:
Autism or Autistic Spectrum Disorders are brain development disorders, generally characterised by difficulties with social interaction to a greater or lesser degree. People on the autistic spectrum may be completely non-verbal, unlikely to make eye contact, prone to repetitive behaviour and noises, and keen to avoid physical contact. However, the spectrum is so wide that it can also be difficult to tell if a person has an austistic spectrum disorder. Autism is not uncommon - in the US it affects 1 in 88 children and is generally thought to be more common in boys. Research on the causes of autism is ongoing, and currently there are thought to be many causes, some of which may be linked to the mutation of genes. There is NO EVIDENCE that the MMR (measles, mumps, rubella) vaccine is linked in any way to autism. I stress this purely because it is one of the things I hear people say often that is a commonly accepted myth. However, autistic spectrum disorders usually become apparent at around the age of 2 or 3 years old. Here are the important symptoms to look out for in a child:
For more information about autism, go to http://www.autism-society.org, http://www.autismspeaks.org/index.php, or just google it! And spread the word, autistic spectrum disorders are not something to be afraid of!!

The Autism Awareness Giveaway Hop is hosted by; Lindsay @ Just Another Book Addict,
Heather @ Fire and Ice Photo, Pixie @ Page Turners, and Kathy @ I Am A Reader, Not A Writer, and I'm really excited to be a part of it.

Last year I gave away a copy of Jodi Picoult's House Rules, and I want to stick with the giving away a book that I loved theme, so this year's prize is a choice between The Curious Incident of the Dog in the Night Time by Mark Haddon, and the amazing To Kill a Mockingbird by Harper Lee, purely because I recently re-read it, think everyone should read it, and because I read on Autism Resources that Boo Radley has autistic characteristics, which I never even thought about before but which completely makes sense.

The giveaway is open internationally, as long as The Book Depository ships to you. To win, just leave a comment with your email and which book you'd like to win and I will pick a winner via random.org on Tuesday 17th April! When you've entered my giveaway, hop on over to the next participant! You can find the list here, because for some reason I can't make it work!