Back in February, after some epic failures to fit all, or even any, of my books into the available space, and realising that it's not o.k to come home with a sackful of books every single time I go past a bookshop, I decided to put myself on a Year Long Book Buying Ban. All capitals, all seriousness, and I was determined. I made it to exactly three months and fifteen days... I know that many of you will appreciate how long this is! And why is it that it feels so much longer? I actually feel like I didn't buy any books for an entire year, and when I was counting back, I couldn't believe that I hadn't (at the very least) reached the six month mark!

So anyway, three months and fifteen days... and then, this happened: 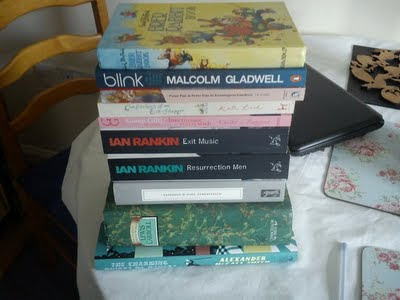 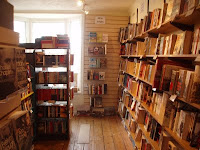 It really isn't as bad (good??) as it looks, and here's why. The reason that I absolutely had to break my ban, was that we went to Whitstable at the weekend, which has two of the most awesomely awesome bookshops that I have ever come across in my life, and I've been in a lot! The first is Harbour Books, and oh my goodness this place is AMAZING. They stock all new books, and it's in a gorgeous little shop with lots of narrow awkward stairways and twisting turns and secret corners, but here's the great bit; a huge majority of their brand new books are only £2.99! And as if that wasn't enough, piled around the top of the staircase, and on all the shelves lining the walls, are all their sale books, most of which are only 50p each! Seriously, how on earth could anybody expect a person such as myself to be in a place such as this and not buy anything?! No I haven't been paid to plug them, but seriously, if you are (or ever find yourself) in my sunny little corner of Britain, go to Whiststable, go visit Harbour Books, and then make me a cake to say thanks :-)

Ok so, on to the second bookshop. I had to google the name of it, as I was too in awe at the time to notice, but it's called Oxford Street Books, and their website is almost as gorgeous and well laid out as their shop. It's a second hand and antiquarian bookshop, and I was totally thrilled to find it, as lately the fiance and I have been lamenting the horribly disorganised state of both of our local second hand bookshops. You know when bookshops have that slightly damp, musty smell? Our locals are like that, and as far as anyone can tell, the books aren't organised into any kind of system or categories either. Totally overwhelming. Anyway, this place was the exact opposite of that. It is beautiful. Outside, on tables, they have a load of 95p paperbacks, organised in genres by table, and then inside it's literally floor to ceiling books, organised by subject, and then by format. The guy that was in there when we were was amazingly knowledgeable. As we went around a corner we caught a glimpse of his basement storage area, which was literally just piles and piles of books as far as the eye could see, and we had a bit of a joke with him about it. As we were going to leave, my fiance asked him, just on the off chance, if he knew if he had any Noel Streatfeild books in. He told us he thought he had a couple in the basement. I feared for his life (I think he did, too!), but he returned literally minutes later, and apparently unharmed by the gathering hordes of the storage room, with a gorgeous Persephone copy of Saplings, which I'd been after for ages! I was so happy I was pretty much jumping for joy - I spontaneously smiled at two random strangers in the street and asked them how their day was, I think I totally petrified them!

There's my story, and although I'm annoyed with myself for not making it all the way, I'm still very proud of my three months and fifteen days - it's approximately three months and ten days longer than I've ever gone before without buying books!
Now the story's out of the way, here's a list of the books in the above (not so great) photo:

* The Brer Rabbit Book by Enid Blyton - big childhood favourite of mine, and now we've moved away from my mum, I really felt I needed my own copy to indulge in nostalgic moments. My sister's favourite was always Brer Rabbit and the Butter. We still tease her about it :-)
* Blink by Malcolm Gladwell - after my recent cry for creative nonfiction, Sonia  recommended this, and I'm excited to start it! Doesn't really count as a buy, as I swapped for it, but I included it because during the ban I'd limited myself to one swap a month; a number I've currently gone over by about five...
* Peter Pan & Peter Pan in Kensington Gardens by J.M Barrie - bought because I've never read Peter Pan in Kensington Gardens, and because the copy is beautiful!
* Confessions of an Eco - Shopper by Kate Lock was in the 50p sale section at Harbour Books, and as I love books about thrift, shopping, and the environment, I just had to.
* Gossip Girl: Love the One You're With by Cecily von Ziegesar - fiance actually bought this for me, again for 50p, as both my sister (not the Brer Rabbit lover, different sister) and I are big Gossip Girl fans. It has to be my biggest guilty pleasure.
* Exit Music by Ian Rankin - got for me by my future parents - in -law but included in the pile as I wanted to showcase what I've got recently, and because I've not read a lot of detective fiction for a long time, but lots of people have recommended Rankin to me.
* Resurrection Man by Ian Rankin - see above :-)
* Saplings by Noel Streatfeild - because it's Streatfeild, I was running out of her books for my challenge, it was only £4, and seriously, have you seen how gorgeous it is??
* The Complete Lewis Carroll - beautiful beautiful collected set of his work, including both Alice books, plus a load of other stuff I'd never read. £3, and I'm excited to read it!
aaaaaand finally!
* The Charming Quirks of Others by Alexander McCall Smith - hardback, brand new, £2.99. I love McCall Smith, so does my mum, and she doesn't get bought a lot of books, so I thought I'd read it (very carefully), and then give it to her as a gift next time I see her!

So that's it, I'm a total failure, and I totally don't care! I got paid today, and the book acquisition fever is baaaaaaaaaack! :-)