The second rereadathon ends today and I have been a terrible host this time around. I'm so sorry but we've had a bit of a personal crisis (we're all fine, nothing to worry about) that's meant I've spent basically the entire two weeks cleaning and then it was also our fourth wedding anniversary so we were away for a little bit as wellll and that all pretty much adds up to me sucking at my hosting duties!

I think I tried to make the event too much of a big thing this time around. Next time I'll just keep it casual I think. I finished The Night Circus way back after the first few days and since then I've basically been reading Animal Vegetable Miracle by Barbara Kingsolver which I'm loving just as much as I did first time around and will definitely be finishing before moving on to Cress for the next stage of The Lunar Chronicles Readalong. It's also made me buy five (more) fruit trees for our garden next year (we already had apple and pear, now we have two more apple trees, one more pear, a cherry and a plum) and three more raspberry canes. It's achieving its intended goal of keeping my grow your own spirit well and truly alive so it can only be called a success I think! 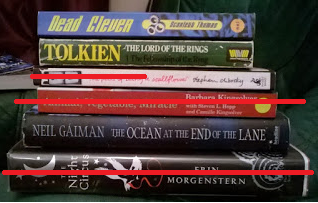 My original TBR and the progress I've made in the past two weeks! Not as great as I'd hoped but realistically with two little ones and husband I love to spend time with it was always a tad ambitious.

I hope you've all enjoyed rereading your favourites as much as I have! See you sometime in the first six months of next year for the next go :-)

Finally, the winner of the challenge giveaway iiiiiiis Katie! Let me know what book you'd like and I'll get it out to you!