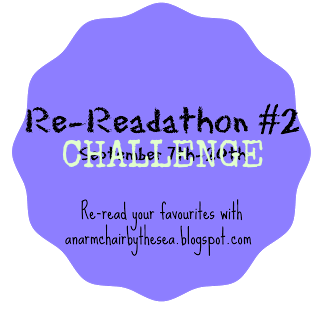 If you took part in the last re-readathon you might remember that last time I asked you to blog about your comfort read, or the one book that you return to time after time. This time I'd like to elaborate on that, because I know a lot of booklovers are also list makers, and ask  you to make a lit of your favourite re-reads. This could be the books you've read the most or just the books you really want to re-read, as the whole point of the Re-Readathon is making time to read all those titles you really want to spend more time with!

I'd love to see your lists of favourites as I'm sure there will be lots that I also love as well as lots that I've never read! And in case you need an incentive, anyone who adds their challenge post to the linky in the kick off post will be entered to win a book of your choice from Wordery!

Ok so now, obviously I need to make my list! Some of these will not surprise anybody, but some may (I hope).

Let's start with the ones that made my list this time:

The Night Circus by Erin Morgenstern - I hadn't long re-read this during the last re-readathon, but this time it felt ripe for a re-read. It's coming into autumn, which is the perfect time for magic and mystery and all things salted caramel. I made this my first re-read of the week and it's just as incredible as I remember. It's making a serious bid for title of my favourite book ever. If you haven't read it yet, you must, and if you don't own a copy let me know because I'm seriously likely to buy you one, you need it that much.

The Perks of Being a Wallflower by Stephen Chbosky - I've seen the film of this more than I've read the book and I want that to change because I love the film so much and pretty much all I remember about the book is that it has a different ending to the film and that I liked the film ending more, which is totally fine when the author of the book is also the director of the film right? I'm sure I saw this on someone's TBR but now I can't for the life of me find whose - if it was you please let me know and put me out of my misery!


The Lord of the Rings by J.R.R Tolkien - So it's kind of cheating to put three books as one but it's my list, I'll do what I want! I absolutely adore LoTR and as a teenager I used to re-read it every year at the beginning of the school summer holidays. I haven't read it for a few years now and I'm keen to revisit middle earth. For all its maniacal dark lords, power crazed wizards, and terrifyingly giant spiders, it's kind of a relaxing place to be....

The Ocean at the End of the Lane, American Gods & Anansi Boys by Neil Gaiman - only Ocean made it onto my pile this time but I did debate for a long time which of these three I would re-read this time around. I don't think I've ever re-read American Gods or Anansi Boys (not have I Ocean but it's not been out as long so that's kind of forgiveable I think) and that has to change soon. I remember them both being great and anything Neil Gaiman is always worth a re-read!

Not on the list this time but books I really wan to re-read some time soon!

Little Women by Louisa May Alcott - of course. I don't think I even need to give reasons for this one at this point.

Our Tragic Universe by Scarlett Thomas - I think this is my favourite of Scarlett Thomas's books. It's much less convoluted than some of her others and it features Devon and sock knitting which are among my favourite things. I actually started re-reading it after I went to hear Scarlett talk bout The Seed Collectors but I got distracted by something else and never finished the re-read.

Attachments by Rainbow Rowell - I started re-reading this at the end of the last re-readathon but then the event ended and other things clamoured for my attention so I never finished it. I so love this story though, and since then I've re-read Eleanor & Park and Fangirl and they both more than stood up to being read again.

The Bookshop Book by Jen Campbell - So I'm guessing if you're reading this you're probably into bookshops and this book just basically talks about loads of different, amazing, independent bookshops around the world. It's made me want to visit so many different places and was major inspiration for declaring 2016 my year of the indie, so I feel I should re-read it in preparation for that!

The Discworld Series by Terry Pratchett - I don't think this needs much explanation either. Specifically, I haven't read The Shepherd's Crown yet so I'm thinking of re-reading the Tiffany Aching series before I do.


The Brief Wondrous Life of Oscar Wao by Junot Diaz - having read Drown and This is How You Lose Her recently (ish) I feel the need to revisit my first Diaz experience!

Link up your challenge entries via the main linky in this format please: your name (Challenge). I'll draw a winner at the end of the Re-Readathon.

all links are affiliate. If you purchase through them I will receive a small commission and be very grateful.
Posted by anarmchairbythesea at 08:00