Every time I go book shopping with one of the amazing friends I have been lucky enough to make through blogging I think how nice and relaxing and giddiness inducing it is to go book shopping with people who are equally ridiculous about books; who don't sigh or frown or tut but say things like 'you only have three? Here, read this, it's great' while shoving books into your arms. 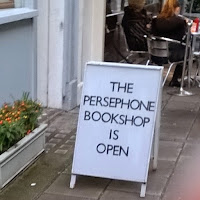 When Katie and I visited the Persephone Bookshop back in February of this year we had a conversation about how we feel like we should have been to more of London's bookshops than various Waterstone's and Foyles, lovely as both of these things are. Also you may have seen a brief murmur (and the series that is Make Mine an Indie) about me buying only from independent bookshops or publishers during 2016. All of these things have amalgamated in my brain to the idea of having a Bookshop Crawl in London to which I have been and will continue to be inviting bloggers, booktubers and booklovers of all varieties via the magic of this blog and social media.

Because I work in retail and know how incredibly depressing the first couple of months of the year can be sales wise I thought it would be cool if we wrapped up warm and incorporated several stops for hot drinks and cake into the itinerary and hit the bookshops of London hard one Saturday in January or February. Let's cheer up some booksellers and make some new bookloving friends!

I've already had a lot of great response to the idea on twitter but I wanted to blog about it just to have a place to put my thoughts in a vaguely cohesive manner. Obviously this is still months away and subject to change but I would love your input! Depending on how many people eventually come we may make it more of a fixed itinerary or just 'meet up, bookshops in x area, lunch, bookshops in y area, dinner, optional evening drinking' during which you would be free to drop in and out/ join us or leave as you pleased. Let me know which you'd prefer! Either way the list maker in me will be inclined to send you an itinerary - ish list/map type document with suggestions I suspect. There are also vague plans afoot for potential scavenger hunt type things to pick up in bookshops but we'll see if that goes anywhere. I tend to get carried away in the first flush of an idea!

As a lot of the people I've spoken to so far I only vaguely know from twitter or a little through Ninja Book Swap, I think it would be to start with a meet up in the cafe of either Foyles or Waterstone's Piccadilly, as they seem to both be places people want to visit. I'd probably say kick off the day earlyish with tea/coffee and a little getting to know each other and then one of these shops and end the day (before dinner for those that wanted/were able anyway) with the other, but again it depends on where we end up going!

Obviously we won't have time for all of these. Honestly I know I'll have problems getting people out of Waterstone's and Foyles, but it's a low key thing and we can always go back to the ones we don't get to this time next year! Closer to the time and once I have a list of suggestions I'll make a poll and we can visit the places with the most votes. This may entail me voting for Lutyens and Rubinstein and Orbital Comics seventeen times each myself (obviously I won't actually do this as it would be unfair) because I wanna goooooo, but no, democracy is the way forward!

Please let me know in the comments (avoiding Valentines weekend!) which weekends in January or February are best for you. That way people who need to book time off work/organise transport early to get cheaper rates/ sort out babysitting can do so waaay ahead of time if they want. If you're not a Londoner but can get to the capital for the day or weekend I'd love to meet you!

I'm really excited about this and about putting our book buying power behind some great bookshops as well as hopefully putting some faces to names, and I hope lots of you will be able to join me and make the #londonbookshopcrawl an epic and memorable day.

If you'd like me to email you with more information once I have it please sign up via this form. I will be starting to collate people's thoughts and get more opinions on a vague plan sometime during October.