I love lists and statistics and anything thusly (yes, thusly) related, so I kind of thought I had to participate in the 3rd annual End of Year Book Survey, hosted by The Perpetual Page Turner. Pretty much the reason why I started this blog (which, by the way, will be TWO in January! How crazy is that?!) was because I have absolutely no capability to remember what I've read, and as this is still the case it's particularly fun for me to look back over my reviews and Goodreads to answer these questions! 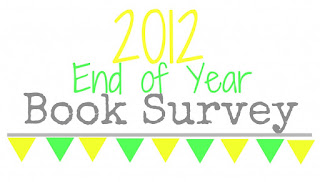 1. Best Book You Read in 2012?
I read quite a few really good books this year, but I think my favourite probably has to be Let's Pretend This Never Happened: a Mostly True Memoir by Jenny Lawson. It was just awesome and hilarious and I ended up passing it round to people I was with while I was reading it, so they could see what was making me laugh so much.

2. Book You Were Excited About & Thought You Were Going to Love More but Didn't?
I think probably One Day by David Nicholls, although I did enjoy it. I just didn't adore it in the way I thought I would. I still have to see the film though. Oh, and there was So Many Books, So Little Time by Sara Nelson, which I really wanted to review because I had loads to say about it but never got around to it for one reason and another. I really love books about books, but this was just waaaaay too judgemental for me, and seriously Sara Nelson, who has one book to read on public transport and another to read at home just because they're worried what random strangers will think about them for reading the book they're reading at home? Weird.

3. Most Surprising (in a good way!) Book of 2012?
I think this has to be Amy & Roger's Epic Detour by Morgan Matson, of which I was expecting precisely nothing (because it's YA, and I have this awful immovable prejudice against YA. I am going to rectify it in 2013), but which turned out to be really great and fun and just generally awesome. Also The Descendants by Kaui Hart Hemmings way back at the beginning of the year (which I again didn't get around to reviewing. I've really sucked this year!) which was just purely epic. And I still haven't seen the film of that either...

4. Book You Recommended to People Most in 2012?
Thinking about it, probably The Tenant of Wildfell Hall by Anne Bronte because it was just SO MUCH AWESOME. So much so that I actually wrote two reviews of it, just because there was so much to say.

5. Best Series You Discovered in 2012?
I don't know if it counts because I actually read the first couple at the very tail end of 2011, but I've read most of them this year, so the Fables series of graphic novels by Bill Willingham. The best series that I've legitimately discovered in 2012, though, is the All Souls Trilogy by Deborah Harkness. While they weren't astoundingly brilliant, A Discovery of Witches and Shadow of Night were both interesting and well worked out and I liked them. I need the third one now please. Thanks.

Oh! Final one, The Umbrella Academy by Gerard Way (aka that guy from My Chemical Romance) and Gabriel Ba. Seriously seriously cool graphic novel series. There are only two at the moment, but there's meant to be a third appearing in the not too distant future.

6. Favourite New Authors You Discovered in 2012?
Allegra Goodman is the big one I can think of off the top of my head. I randomly got The Cookbook Collector out of the library and literally fell in love with it. It's impossible to get hold of any of her others without paying full price for them, so I'm still waiting at the moment and hoping they'll turn up somehow by magic...Also Alison Bechdel (I read both Fun Home and Are You My Mother? this year), whose graphic novels are just amazing. And Catherynne M. Valente. The Girl who Circumnavigated Fairyland in a Ship of Her Own Making was just the right balance of fairytale, common sense and pure beauty and I can't wait for the next one!

7. Best Book That was Out of Your Comfort Zone or Was a New Genre for You?
Without a doubt Ready Player One by Ernest Cline. I really don't read a lot of science fiction, and especially not much dystopian fiction but people kept talking about it and it was so. great. Again, I never reviewed it. I really must get better at this next year. I have a feeling there's something in my drafts folder, but that really doesn't count as it never actually made it onto the blog.

8. Most thrilling, unputdownable book of 2012?
I know I read A Discovery of Witches and Shadow of Night both very quickly. Also The Absolutely True Diary of a Part-Time Indian by Sherman Alexie which I just finished and pretty much couldn't put down.

9. Book You read in 2012 that you are most likely to reread next year?
Probably either Let's Pretend This Never Happened, or Maine by J. Courtney Sullivan, which was brilliant. 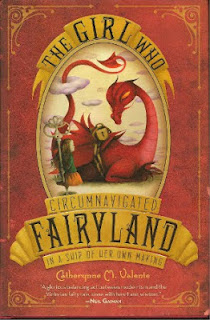 The Girl Who Circumnavigated Fairyland in a Ship of Her Own Making by Catherynne M. Valente.
This book was just beautiful from start to finish, so the cover was pretty much just the icing on the cake!

11. Most Memorable Character in 2012?
I can't really think of anybody that memorable off the top of my head, although I will say that dude from Tenant whose name currently escapes me who thinks it's ok to go around whacking people over the head with his riding whip and then getting annoyed when they won't be friends and play nicely with him. He was hilarious.

12. Most Beautifully Written Book read in 2012?
Also The Girl Who Circumnavigated Fairyland in a Ship of Her Own Making I think, or Ragnarok by A.S Byatt. Both are quite poetic and very relaxing to read.

13. Book that Had the Greatest Impact on you in 2012?
I really still haven't got over reading The Night Circus in 2011. I think that's the book that's had the biggest impact on me, ever probably. But if I had to pick one from 2012 I'd probably say Morgan Matson's Amy and Roger's Epic Detour, just because it's the dreaded YA and I absolutely loved it and it made me want to read much more in the genre, so well done Morgan Matson!

14. Book you can't believe you waited until 2012 to FINALLY read?
The Absolutely True Diary of a Part-Time Indian by Sherman Alexie. It's been on my radar since I was fourteen and on my TBR for about eight years, and I finally read it in November and it was great.

15. Favourite Quote from a Book read in 2012?
I don't really have one. I'm horrendous at writing quotes down or remembering them at all. I really need to address this!

16. Shortest & Longest Book read in 2012?
Longest was Harry Potter and the Order of the Phoenix, and the shortest I don't know I'm afraid!

Skipping the next couple of questions as I don't have decent answers!

19. Favourite Book read in 2012 from an Author you'd read Previously?
Probably Peaches for Monsieur le Cure by Joanne Harris, sequel to Chocolat and The Lollipop Shoes. I love Harris' books in general, and this one really delivered.

20. Best Book Read Based Solely on a Recommendation from Somebody Else?
Both Tolstoy and the Purple Chair by Nina Sankovitch, and Let's Pretend This Never Happened by Jenny Lawson were recommendations from other bloggers, for which I am massively grateful!!


Book Blogging/Reading life in 2012
1. New Favourite Blog You Discovered in 2012?
This will not come as a surprise to anybody at all, but it has absolutely got to be Devouring Texts. Laura is awesome and hilarious and so is her blog and if you're not already following it, I want to know why!
2. Favourite Review that you wrote in 2012?
Probably either Louisa May Alcott:The Woman Behind Little Women by Harriet Reisen or Are You My Mother? by Alison Bechdel. Also it probably doesn't count as a review, but I really enjoyed writing my Best & Worst of Scarlett Thomas post for Alyce from At Home With Books.
5. Best Event That you Participated in?
I have to say that I really enjoyed the Bout of Books Readathon that I participated in while I was pregnant. It was brilliant and not at all stressful, which was great. For 2013 I plan to go out and get involved in some actual, real world literary events (starting with the Where's Wally 10K to raise money for the National Literacy Trust in March - sponsor me here) and I really want to go to a literature festival, having never been to one!
6. Best Moment of Book Blogging in 2012?
I have to say that this year has been the year that I really realised how amazing my book blogging friends are. Seriously special thanks to Ellie, Hanna and Laura who have been ridiculously supportive through good times, bad times and babies and have inundated me with brilliant post. You guys always make me feel better :-) I think 2013 should be the year to actually meet each other in person, especially since I pretty much drove past Laura's house the other day!
The other questions may or may not be the subject of entire posts of their own, if I get around to writing them ever! If you want something to compare this to, my answers from 2011 are here.
﻿
Posted by anarmchairbythesea at 09:00