It's been a little while since I did a baby books post, and I've managed to accumulate a few more. I'm particularly impressed with this lot though, as one was free and all the others were less than £1.50 which is pretty much winning, in my opinion. 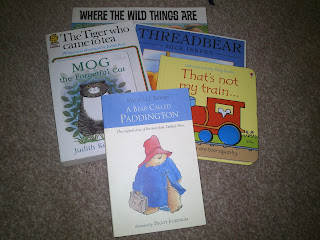 
If you are particularly interested/can be bothered, here are parts 1, 2, 3 and 4. This may well be the last one of these I do before he is born, but to be honest I quite enjoy writing them so I may keep it on sporadically after he's here. Rhys keeps telling me to stop buying children's books as if we already own them all he won't get the joy of going out and buying his own books, but honestly, there are so many books I don't think it's possible for us to have so many he won't want to read other things as well. Also, most of mine (outside of board and picture books which obviously I have to buy for him as he won't be old enough to buy for himself) are classics, so he still has the entire of contemporary children's literature to explore for himself!

As usual any suggestions or your personal favourites are much appreciated!
Posted by anarmchairbythesea at 10:10