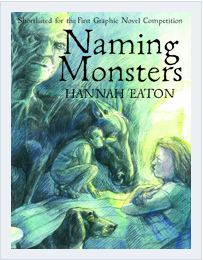 From the press release:
The year is 1993, as we join Fran on a wild ride around London while she navigates the grief of losing her mother. Tales of strange creatures that might have been introduce each stage of her journey. Her adventure, often with best friend Alex in tow, is a psychogeography of the city and its suburbs, punctuated by encounters with Fran's semi-estranged dad, her out-of-touch East End nana, a selfish boyfriend and the odd black dog or two.

As Fran says herself: monster are all around us.

It occurs to me that all the coolest books have references to folklore. Seriously, Harry Potter, The End of Mr Y, everything Neil Gaiman ever writes? And now Naming Monsters. This was one of those books that I knew was going to be good right from the start, and it didn't disappoint.

Naming Monsters is a graphic novel in black and white, which seems to be the sign of a 'serious' graphic novel, as opposed to those belonging to the vaguely fantasy/superhero genres. Also, it is endorsed by Alison Bechdel who wrote Fun Home and Are You My Mother?, both of which I liked, although I'm not going to do that thing I normally do where I compare things the whole way through a review, because in some ways this is similar to Bechdel, but it's also very much its own thing.


The novel has an incredibly believable protagonist in Fran. I find that teenagers as protagonists can often be overwritten (kind of Dawson's Creek style, where they say things I've never heard a teenager say so that the writers can make them sound like adults..) or really two dimensional and undeveloped, but Fran was a lot like I remember being as a teenager. I think that was probably the thing I enjoyed most about the book - that the atmosphere of it felt so much like my teenager years, I could totally relate!

I also really loved the way that tit is divided by mythological creatures which relate to what is being dealt with in that section of the book. The death of Fran's mother is always present throughout the book, but it manages not to be depressing to read at all. Although she's always dealing with it and that is represented, she doesn't actually talk about it that much, which I found made the novel feel more truthful. When bad things happen you don't necessarily talk about them all the time, but try to take your mind off of them...

Basically Naming Monsters is beautiful and honest and if you were a teenager in the '90s you will probably love it. If you're interested in well written memoirs, anything to do with folklore, or just beautifully drawn graphic novels, you should read this.

And so to enable that, the lovely publishers, Myriad are providing me with two copies of Naming Monsters to give away here on the blog! To enter to win a copy you  must be from the UK and all you have to do is what it says on the form :-) The giveaway runs until Sunday 16th June, so everyone should have maximum time to enter!! a Rafflecopter giveaway
Posted by anarmchairbythesea at 09:00