I want to warn you before I start that this post may contain a lot of exclamation marks and photos.

With that out the way, I have had an incredibly epic last few days. Thursday was my birthday and I kind of just hung out at home with Benji and Rhys and made cake and had presents and it was lovely. Then on Friday I took Benji and my very warm and exhausted self up to London to finally meet Hanna and Laura! I seriously thought I would be really nervous about it (remember a few weeks ago when I got invited to a book launch and wrote a whole post freaking out about it? I ended up not going because my sister's plans got messed up so I took it as some kind of sign that I wasn't meant to go, because I am a total wuss) but I absolutely wasn't. I was visible in the station first, although Laura actually got there first but had to defect to Starbucks for a while, and I thought I'd be standing there and not notice either of them at all. As it happened, I recognised both of them pretty much straight away and I seriously can't tell you how awesome it was to finally meet them both in person! We ate a lot and we walked a lot and we (especially me!) talked A LOT and they gave me amazing birthday presents and it was just generally great. Sadly there was no book buying involved, as it appears that there is not a single bookshop in Chelsea (but there are two Chanel shops...) but it was epic nonetheless. After we'd walked round in a massive circle, through a bit of a rainstorm in Hyde Park and countless cyclists had dinged their bells at Hanna for walking right on the very edge of the cycle path - seriously, her foot was just about touching the white line at the far edge - we ended up on rush hour trains to our respective homes/beds for the night, having entirely forgotten to take any photos at all, with me overanalysing my behaviour all day, deciding that I'd definitely behaved like a total idiot and not listened to anyone and just talked about myself all day and that they both hated me, but still super excited that we met up. Having established that (hopefully) they probably don't hate me, more meeting up must be done in the near future, with the taking of photos and the buying of books and the meeting of Ellie.

So, that bit there are no pictures of, but then I went to my mums for a couple of days, had a lovely day on Saturday hanging out with my London friends, and today Rhys came to pick us up and we came home via The Roald Dahl Museum & Story Centre in Buckinghamshire. 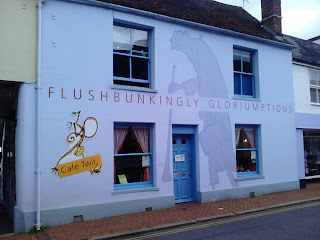 It's seriously awesome. It's just a little museum with two galleries which are full of information about him and the letters he wrote his mum from boarding school and interactive things for kids to do, and then there's the story centre, which I am going to take Benji back to when he is bigger, because it's full of different activities and story sacks, where you could read the story while pulling all the different items from the story out of the sacks and learn things about them as you went, and a massive dressing up box full of crazy things. They also have regular storytellings and craft workshops and all kinds of other awesomeness. If you haven't been and you like Roald Dahl or have any children in your life, you should go. Seriously. 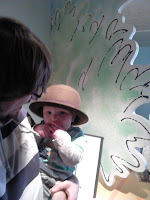 This is a picture of Benji wearing a hat from the dressing up box. There's also a picture of him wearing a replica of Roald Dahl's pilot hat but it came out a bit blurry. After we finished at the museum we had lunch in Café Twit which was also great. They have 'Bogtrotter Cake' (massive, incredibly chocolatey) and 'Miss Honey's Scones' among other such stuff.
Once we finished there we went for a walk (there's a little 'town trail' walk you can do around some Dahl-related places) and visited his grave. The memorial to him there is lovely. A memorial bench has been put in with the name of one of his children on each bench and a quote from The Giraffe, the Pelly and Me around the bottom and then there are three giant footprints leading down to his actual grave itself. By the gravestone there's a collection of pencils and pens and pieces of paper where people have left their own little messages and tributes to him. It was really beautiful and awesome. Here are some pictures:

﻿﻿﻿
﻿﻿
So that's been my amazing birthday weekend, and finally here's a picture/list of the seriously awesome things I got this year: 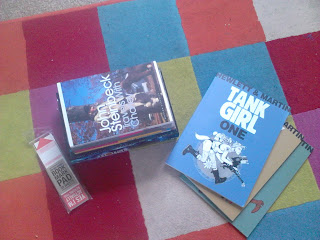 On the far left is an awesome bookmark pad, got for me by the lovely Hanna, which you can write stuff about the book on and which is super helpful to me because I have as yet failed to keep any kind of review notebook.
On the far right is three volumes of Tank Girl from my friend Alex and her family. I've started reading it and there are deranged kangaroos in it. What more could I ask for? 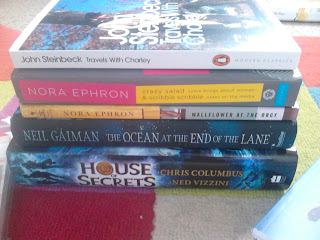 The book pile is thus:
I promise I have now finished with both the photos and the exclamation marks :-) But you can see how it needed to be blogged about because it was epic!
Posted by anarmchairbythesea at 20:25