So it's somehow June already, although the weather round here seems unsure of that, but anyway I just had my 29th birthday, which means we are definitely halfway through the year and I thought I'd like to do some posts about the awesome stuff I've been reading this year. Obviously though there's way too much to talk about in one post so I thought I'd do several separate posts divided up by subject and just talk about 3-5 titles in each genre that I've read and enjoyed and think you should read!

Before we go into this, you may have noticed that my title links all link to Wordery. I've been using them pretty much exclusively for online new book purchases for over a year and I love and adore them. They are independent, offer FREE worldwide shipping and have a brilliant selection. Prices are good too. I've recently become a Wordery affiliate, which just means that if you decide you want to buy a book I mention in this or another post and you do so through the link in the post or the little banner I have in my left hand sidebar, I will get a small commission and my grocery bill will love you forever. 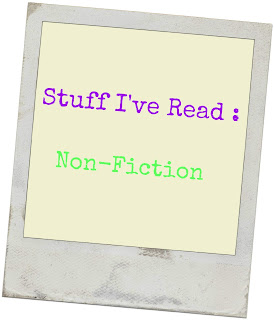 Kicking it off is a genre that I'm constantly striving to read more of; non-fiction. I do read loads more of this than I used to a few years back and I entirely blame Nonfiction November for that because the recs I've got through that event are just insane!

I read The Year of Living Danishly by Karen Russell way back at the beginning of the year after I bought it for Heather in last years Nonfiction book swap during Nonfiction November. Karen Russell moves to Denmark when her husband is offered a job at Lego (!!) and becomes fascinated by how Denmark is supposedly the happiest country in the world. The book goes through all the different things that supposedly make them happy and Karen Russell explores the truth behind it all and how it works. I have a little bit of a thing for Scandinavia and that part of the world really, and I just really enjoyed this book.

Most of my non-fiction so far this year has been memoir, and the second title I really liked was also my first audiobook, Shonda Rimes' Year of Yes. Shonda Rimes is a fantastic narrator and I'd massively recommend the audiobook. The book basically does what the title says and documents a year in which she vowed to say yes to things that pushed her outside of her comfort zone and which she would usually have automatically said no to, but it's also hilarious and because she's the lady she is (creator of Grey's Anatomy and several other popular TV shows) she gets to do some amazing stuff over the course of the book. Very interesting and well worth a read (or listen).

I Will Find You by Joanna Connors I've already talked about here several times but I couldn't pass up the chance to mention it again since it really is an incredible book. I've literally never read anything like it. Joanna Connors was raped as a young married woman and after many years she decides to try to find out more about her rapist; what drove him to do it and what he was like. The book is incredible and just read it read it read it.

Final pick is kind of a cheat since I'm in the middle of it but I'm pretty confident it's going to be on my best of 2016 lists and you should absolutely pick it up if you're interested in feminism or even just being an understanding, accepting person. If you know any teenage girls you should get it for them and it is Girl Up by Laura Bates, who you may (should) know from her previous book Everyday Sexism and The Everyday Sexism Project. This is the book I wish I had when I was a teenager. It's so unashamed and hilarious and straight up about every single thing from vaginas to sexual orientation to mental health. Plus it has helpful pictures and stuff which I love. I've giggled out loud while reading it and I'm sure I will giggle more before I reach the end. I think Rhys feels I should issue a rant warning with my recommendation though which is if you're like me and like to rant about stuff you've read, this will probably make you do that. Constantly. At your unsuspecting (and totally feminist) husband, who may then feel slightly attacked...Basically, this is probably the book your mum should have given you when you hit puberty instead of that one written by some middle aged doctor guy who had no idea what a teenage girl was.

And in case you need some more titles, here are some from my shelf that I'm really excited to read:

Big Magic by Elizabeth Gilbert and Bad Feminist by Roxane Gay (both on my 20 Books of Summer List)
Liar, Temptress, Soldier, Spy: Four Women Undercover in the Civil War by Karen Abbott (not a memoir! Hooray for me!)
My Salinger Year by Joanna Rakoff (OK, back to memoir)
Watching the English by Kate Fox (also not a memoir!)

What great non-fiction have you read recently?