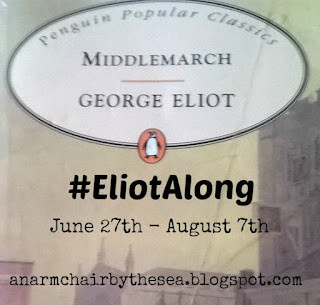 I don't know about you guys but this massive book has been on my TBR for literally years and I am really excited to finally read it. I have a mixed experience with George Eliot; I've read two of her books previously, one of which (Silas Marner) I really liked and one of which (Adam Bede) I felt very meh about, but either way I plan to finally get through Middlemarch and I'm hoping it will be as great as so many people tell me that it is! I'm really looking forward to hearing everyone's thoughts about, so please make sure you link up your posts/tweets/IG pics etc. The linky on this post will be for kick off posts if you want to write one, and then I'll post again next Monday about the first weeks chapters and a linky for week 1 posts, if that makes sense? Also please make sure you've linked up wherever it is you're going to be talking about #EliotAlong on the original post so I can make sure I'm following you and everyone else can say hi too!

In case you don't know, George Eliot was the pen name of Mary Ann Evans, and English author living in the 19th century. She wrote under a pseudonym because she wanted her work to be taken seriously and to get away from the stereotypes of women only writing light hearted chick-lit type stuff (like, 19th century chick-lit, so I imagine there was more shopping and less sex...or maybe just more dancing) and published Middlemarch originally in eight installments during 1871 and 1872. She wrote seven books in total and scandalised everyone by living with a married guy for more than 20 years. I've been dipping in and out of The Road to Middlemarch by Rebecca Mead over the last few weeks and it's really interesting about her life and how she began to write the novel.

So essentially Middlemarch is about the lives of a bunch of people living in a fictional town called - wait for it - Middlemarch! It's set in the years leading up to the 1832 Reform Act (which I just looked up on Wikipedia and is apparently the Act that made electing MPs properly a thing - I know, my history is shocking, please feel free to correct/embellish if you know more than me!) and has lots and lots of characters, the major one of whom is named Dorothea, a name which annoys me extremely because my head always wants to pronounce is Dorothy-ah, which is probably (definitely?) not how it's pronounced! Again, feel free to enlighten me. So yes, lots of people, small town setting, lots going on!

In case you missed it the schedule is here, and here's a lovely picture of my somewhat scruffy, from-a-charity-shop edition: 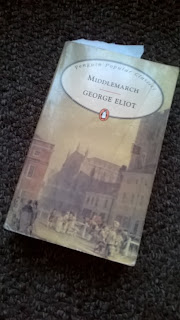 You may recognise it because I made the graphic for the readalong by cropping a photo of the book and adding text, because I'm a genius at graphics, obv.

Link up your kick off posts here, and don't forget to use #EliotAlong on social media. Happy reading!