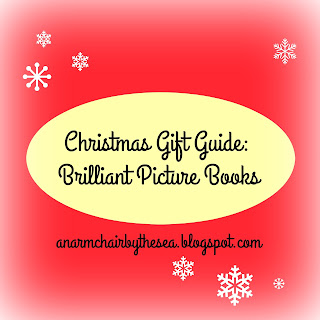 I don't usually partake in the Christmas Gift Guide making, but as I was reading to my kids the other night it struck me that we are fairly adventurous explorers of picture books and have a lot of beautiful and brilliant ones we could recommend. Because they're picture books, I'm sticking to the less well-known titles that we love, or less well-known titles by well-known authors, and I hope that you pick up some of these for your kids/nieces and nephews/cousins/friends kids/yourselves. If you do, let me know what you/they think of them! Links go to Wordery and are not affiliate, but I hope you'll consider using them as they are an independent online bookseller. They offer free worldwide shipping and are generally great. Nobody's paying me to say this, it's just my honest opinion. I use them for pretty much everything I don't buy off eBay or publishers websites. The Snatchabook by Helen and Thomas Dochery

The inhabitants of Burrow Down are having their bedtime stories stolen by a little snatchabook, but his motives aren't what they seem. This is a really sweet book about the importance of bedtime stories and the artwork, as you can see, is absolutely beautiful as well. We first discovered it through the library and just kept borrowing it until eventually we caved and bought our own copy. We read it at least once a week and it makes everybody smile, every time. Perfect for ages 0-5 (but good for everyone). The Highway Rat by Julia Donaldson and Axel Scheffler


Probably everyone's heard of The Gruffalo and The Gruffalo's Child and some of the other well known books by this duo, but I know that The Highway Rat has passed a lot of people by, myself included! If it wasn't for Hanna including it in the wonderful box she sent when Ben was born I wouldn't have heard of it, but it's amazing. It's The Highwayman but retold with the central villain as a rat who steals the creatures food as they travel down the road. You may find yourself randomly reciting bits of it while at work, you have been warned. Perfect for 0-5 and anyone who is familiar with The Highwayman as you will find it amazing and hilarious. No Matter What by Debi Gliori

A lot of people love Guess How Much I Love You by Sam McBratney, and that's a favourite of ours too. Less well known though along similar lines is this beautiful book. Debbi Gliori's artwork is beautiful and the sentiment behind this story ("I'll always love you, no matter what") is lovely. It's a favourite bedtime story in our house. Perfect for 0-5 and kids any age who need to be reminded that they are loved. Someone Bigger by Jonathan Emmett and Adrian Reynolds


This is a wonderful book about Sam and his dad who make a kite and go out to fly it (I'm physically having to restrain myself from reciting the first few lines at this point, I know it so well). Sam wants to hold it, but his dad is adamant that 'this kite needs someone bigger', even as he (and half the town) are pulled up into the sky by the wind. Eventually Sam gets hold of the kite and proves that he was right all along. The boys love it, and even more so now that we also have a Sam - he thinks the character was named after him, it's very cute. Perfect for 0-5. Another one you'll wake up reciting, in the best way. The Sandman: The Story of Sanderson Mansnoozie by William Joyce

If you've seen the movie Rise of the Guardians you'll be familiar with the character of The Sandman, but this is part of the series of books that the movie was based on. Both the story - about how The Sandman became The Sandman and began to be in charge of protecting children's dreams - and the artwork are stunningly beautiful, and it even helped Ben to sleep better because he knows that the Sandman is keeping the bad dreams away now. There are two other picture books in Joyce's Guardians of Childhood series: The Man in the Moon and Jack Frost which I'm sure are also great. We've not read them yet, but I wouldn't hesitate to recommend them based on this one. Perfect for anyone who enjoys a beautiful story. Sylvester and the New Year by Emmeline Pidgen

I mentioned this recently in my feature on Far Far Away Books. This is a beautiful picture book retelling of a fairytale. Sylvester is kind of like Santa except that he is charged with bringing the New Year to Earth each year and taking away the old one. In this tale, the new year is a baby and the old year an old man who is then brought back to where Sylvester lives and put into the river of life, where he will become young ago and be the new year for the next year. We loved the simple, beautiful story. Perfect for 0-5 and anyone who's interested in fairytales. A sequel to Edward Lear's great The Owl and the Pussy Cat poem, this details what happened to the owl and the pussy cat after they got married, and is particularly fun if you know (as we do) the song because you can sing the book to that tune. Julia Donaldson has of course written a song for the book but I grew up with this one. It's really fun. Perfect for 0-7 
I'm sure everyone has heard of Alfie, but he is my absolute favourite and I couldn't not put him on this list. Alfie Weather is a lovely little seasonal collection. Although none of the stories are Christmas based, a few of them are wintery and beautiful and make you feel snuggly with talk of biscuit baking and expeditions to the North Pole. If you know Alfie you'll know that he's all about the simple pleasures and every time we read this collection it reminds me about what's really important in life. Also the artwork is gorgeous, of course. Perfect for 0-7, and nostalgic parents.

These may be the most hilarious two children's books I've ever read, and definitely the funniest picture books. The first is about a bear who has lost his hat and goes around asking people about it, and then eventually regains it by dubious means. The second is about a little fish who steals a hat from a big fish while he's sleeping and then tries to hide from the big fish. They will tax your ability to do voices and suspicion while reading but they are so so funny and definitely worth the effort. Everyone was giggling hysterically by the end. Perfect for everyone who loves hilarious things. If you're looking for something beautiful and inspiring for a little girl (or little boy, but it is about a girl, as the title suggests) you really can't do better than this. It's like a little guide for life and full of hopes and dreams and wonderfulness, as is everything Neil Gaiman writes. The illustration is beautiful and I really, really highly recommend it. Perfect for anyone in need of inspiration or encouragement!

If you have favourite, beloved, beautiful picture books which aren't on this list please let me know in the comments or on twitter! I'm always on the lookout for gorgeous stories to add to our collection, and I hope that I've introduced you to some new titles with this list!
Posted by anarmchairbythesea at 08:00