Things That Make Me Happy #2

Ellie at Lit Nerd has been hosting this as a weekly link up for a few weeks now and I'm excited to take part again! (I don't know if she's hosting this week because she's travelling and I'm writing this at 7am because we'll be busy later but I'm taking part anyway!).

So this is the gig we went to yesterday and it was amazing. We didn't think we'd ever be able to afford to see these guys because tickets are like £50 but then last week they released some more standing tickets and Rhys and my parents paid for a couple of tickets as an early birthday present, which was the most exciting. If you haven't heard of The Piano Guys I want to know why. They are (mostly) two (sometimes four) guys, one of whom plays the piano, the other plays the cello and they do mashups, often of classical music with contemporary pop and cool unexpected versions of songs and if they can make One Direction songs good then they definitely deserve your attention!

The gig was really inspiring. The music was gorgeous, the guys are amazing performers and really funny to boot and I've never been to a gig with such a wide spectrum of people represented - I think the youngest person we saw was around six and the oldest probably over seventy. We may have bought ourselves a signed copy of their latest album, Wonders and we may well be listening to them on loop forever. If I've just introduced you to them, you're welcome. Also check out this, it's my favourite:

There's a post about this going up tomorrow for Inspiration on Monday so I won't post more pictures but I'm really enjoying making this (secretly) educational and fun book for Benji's birthday in October. I anticipated that it would take me ages to finish because I'm generally such a procrastinator but then it turns out that this project is really fun, pretty simple and very inspiring so I'm racing through it!

Still loving this. This week we missed a couple of days because of travelling and work, but we still did lots: a couple of seaside walks, some reading outside and listening to birdsong before work, a walk in the woods with associated collecting of natural items, and a lot of time in the garden earthing up potatoes, picking strawberries and generally maintaining things! 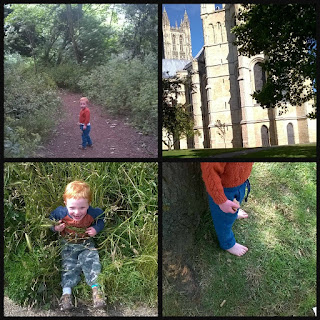 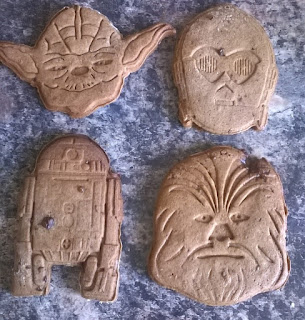 These were reduced in Lakeland this week and so when Rhys was pottering around town with the boys he got some. We already have the Tardis and Weeping Angel cutters from one of Rhys' Ninja Swap parcels and they're great - the detail is awesome! We baked a batch of chocolate biscuits for Rhys to take to work and these are from the batch of chocolate gingerbread we baked for my family this weekend to say thanks for looking after the boys while we were at the concert. In case you're interested the recipe is thus:

Cream together butter and sugar, then stir in golden syrup. When thoroughly mixed add the flour, cocoa powder and ginger and stir to form a dough. Flour the tabletop and roll out the dough to roughly 1-2cm thick. Cut shapes. Bake at 180C for approx 10 mins or until turning golden round the edges.

At a car boot sale last week we picked up copies of a really cool looking Winnie the Pooh memory game for kids. It has little honey pots with different colours on the bottom and baskets and you basically have to collect three honey pots with the same colour on them. Not too advanced for Ben to be interested in and a gorgeous game! We also got a copy of The Wind in the Willows board game which we have yet to play but it may be the most beautiful game we own. We have a silly amount of board games and never play a lot of them. I'm hoping that this summer will give us a kick to start playing again and enjoying some time together as a couple and as a family. 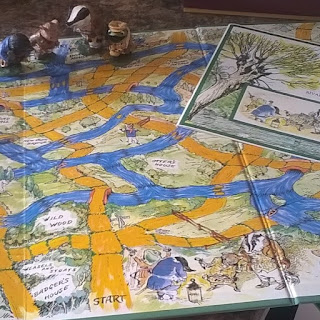 What made you happy this week?
Posted by anarmchairbythesea at 07:44