The Classics Club: A Revamp

I originally joined the Classics Club when it was first started by Jillian (of the now defunct blog A Room of One's Own) back in 2012, which means I'm almost half way through the original time allotted for my list. Clearly, this isn't working out.

Admittedly I've taken a slight step back from the club since having babies, but it's still something I'm very much interested in, so in the pursuit of staying interested, I'm having a revamp of my list! I'm whittling it down to only 50 books,half of which must be books I already own.

You will notice that the list runs to 58, but that's because I'd already read eight of the listed books before I started revamping, so I now actually have 50 books on my list. I'm also resetting my time schedule for it so that today is the start point. Therefore I have until 27th August 2019 to complete my list :-) Much more doable.

1. A Room of One's Own by Virginia Woolf2. A Wrinkle in Time by Madeleine L'Engle3. Ariel by Sylvia Plath4. Brave New World by Aldous Huxley5. Charlotte's Web * by E.B White6.Cold Comfort Farm by Stella Gibbons7.Fear and Loathing in Las Vegas by Hunter S. Thompson8.Forever by Judy Blume 9.For Whom the Bell Tolls by Ernest Hemingway10.Gone with the Wind * by Margaret Mitchell11.Goodbye to Berlin by Christopher Isherwood12.Jamaica Inn by Daphne du Maurier13.Lady Chatterley's Lover by D.H Lawrence14.Let the Circle Be Unbroken * by Mildred D. Taylor15.Miss Pettigrew Lives for a Day by Winnifred Watson16.Rebecca of Sunnybrook Farm * by Kate Wiggins Douglas17.Robin Hood by Henry Gilbert18.Roll of Thunder, Hear My Cry * by Mildred D. Taylor19.Save Me The Waltz by Zelda Fitzgerald20.Tell me the Truth About Love by W.H Auden 21. The Absolutely True Diary of a Part Time Indian by Sherman Alexie
22.The Age of Innocence by Edith Wharton
23.The Beautiful and Damned by F. Scott Fitzgerald24.The Bell Jar * by Sylvia Plath
25.The Cocktail Party by T.S Eliot
26.The Dharma Bums by Jack Kerouac
27.The Grapes of Wrath by John Steinbeck
28.The Great Gatsby * by F. Scott Fitzgerald
29. The Hours by Michael Cunningham
30-37.The Little House Series by Laura Ingalls Wilder (Little House in the Big Woods *, Little House on the Prairie *, On the Banks of Plum Creek, By the Shores of the Silver Lake, The Long Winter, Little Town on the Prairie, These Happy Golden Years, & The First Four Years)
38.The Outsiders by S.E Hinton
39.The Marvellous Land of Oz by L. Frank Baum  40.The Phantom Tollbooth by Norton Juster
41.The Road to Memphis * by Mildred D. Taylor
42.The Stranger by Albert Camus
43.Travels with Charley by John Steinbeck

19th Century44.A Tale of Two Cities by Charles Dickens
45.Around the World in 80 Days by Jules Verne
46.Grimms' Fairytales by Jacob & Willhelm Grimm
48.Nights with Uncle Remus by Joel Chandler Harris
49.Quo Vadis? * by Henryk Sienkiewicz50.Tales of Mystery & Imagination by Edgar Allan Poe
51.The Awakening by Kate Chopin
52.The Pickwick Papers by Charles Dickens
53.The Professor by Charlotte Bronte
54.The Tenant of Wildfell Hall by Anne Bronte55.Walden by Henry David Thoreau

57.The Aeneid by Virgil 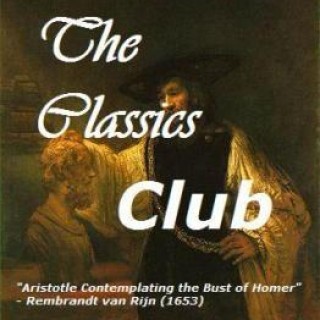 I think I might actually make a dedicated Classics Club shelf for the books that I own now, which will hopefully help to motivate me a bit more as well. I've been reading a lot of parenting books and such recently and after a particularly hectic day the other day I retreated to The Professor and realised how much I miss reading the classics, and reading for myself rather than always with the goal to learn how to do something. I think it's important for my kids to know that I love reading for its' own sake as well as for the skills that I can learn from books and aside from reading to them (which I really do love). I want them to grow up seeing that reading is a viable and fulfilling hobby to have, and I hope this shift will help with that.
Posted by anarmchairbythesea at 12:10