Books on my Bedside Table #2 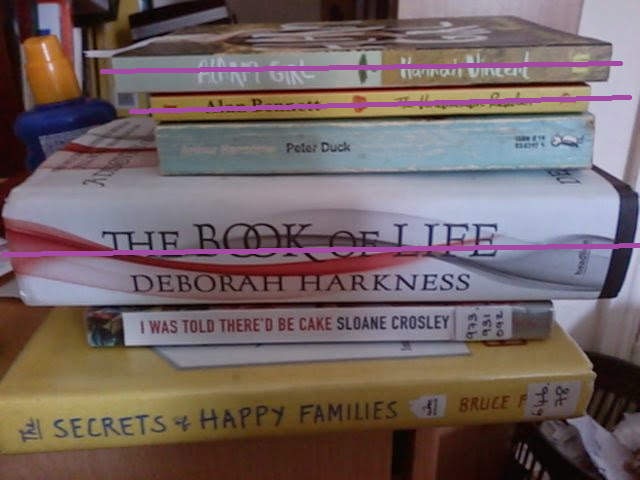 Somebody else does their reading pile posts like this, so I apologise (I think to Sarah?) for nicking your idea, but I like the visual way of marking my achievements! This is the picture from the first installment of Books on my Bedside Table, and the ones crossed through are the ones I've managed to finish since then. You will notice that a couple reappear in my picture for this time, generally because I suck, but also because everything was pretty much swamped by the awesomeness of Alarm Girl. Shock of shocks I've actually managed to review two of the three I've read as well! I know, I'm pretty much speechless too.

Alarm Girl by Hannah Vincent, review here.
The Book of Life by Deborah Harkness, review here.
Both sent to me for review consideration by their lovely publicists!

This was originally conceived as a weekly meme but I think it's safer to say I'll aim for weekly and it will probably be more like ten day/two weekly. This would've gone up about four days ago except that my bedside table is in the room in which the baby currently sleeps and I usually only remember about taking a picture of the books on it after he's in bed for the evening. As he's currently just started sleeping through from about 7/8pm - 2/3am I really don't want to jinx it by waking him up! This morning though I remembered to take said photo, and here it is, in all its' blurry glory: 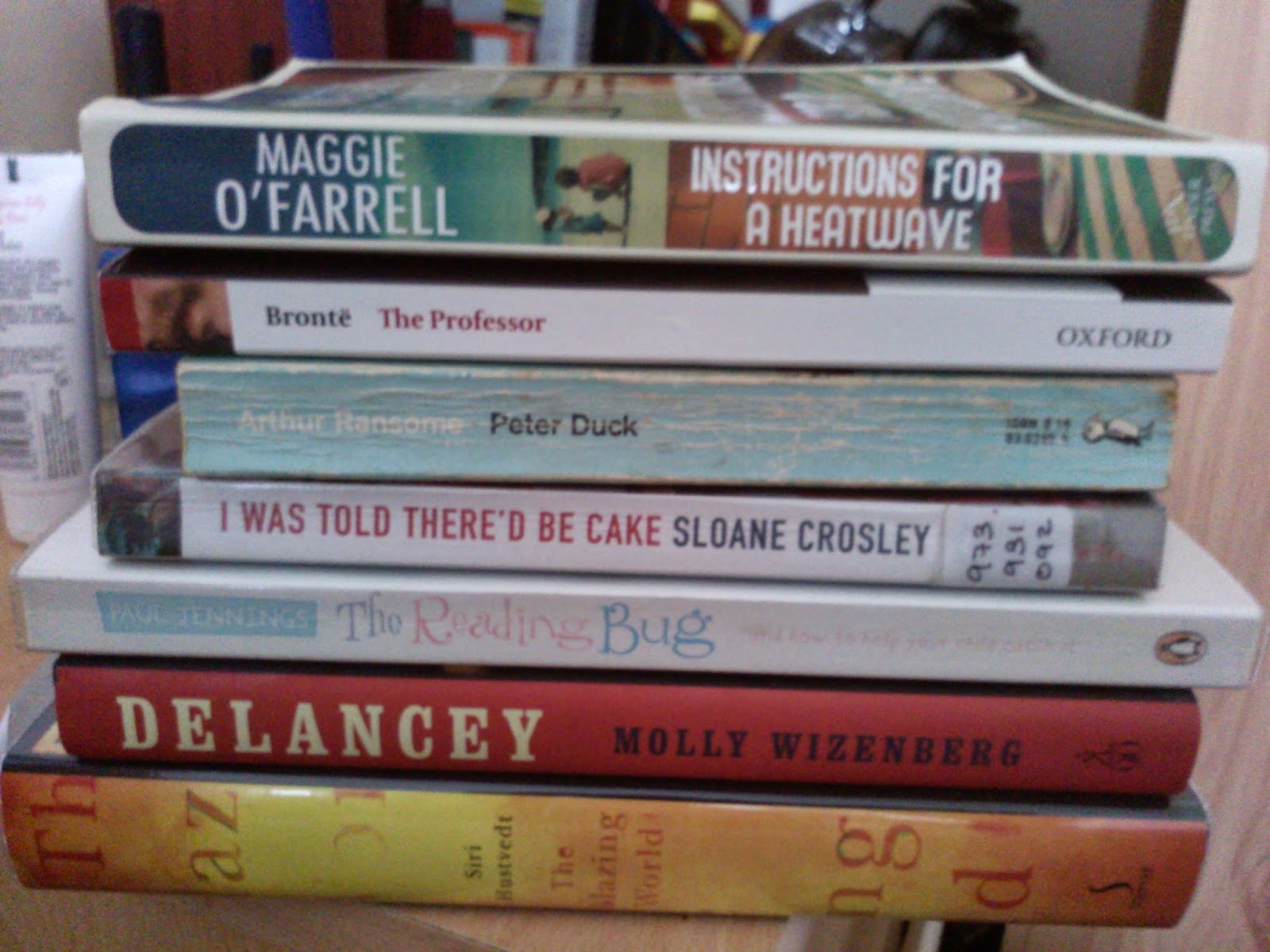 You will notice the reappearance of Peter Duck and I Was Told There'd Be Cake. I have read a few more chapters of Peter Duck and I am still loving it. I'm quite happy to string it out a little long though - that way maybe my Ransome reread will last me until the end of the year. I haven't read any more of I Was Told There'd Be Cake, but pretty much just because Delancey has taken up all of my non-fiction reading capacity, and it's amazing so far. I really really love (and I'm sure I've mentioned this before) Molly Wizenberg's blog and her books are kind of just an extension of that. They're delicious. Through the Ninja Book Swap, I 'met' the lovely Leanne, who is hosting the Manbooker Longlist Readalong (#TBCChat on twitter). Due to library queues (I am now 71 of 85 people waiting to read Us by David Nicholls) the first one I could get hold of was The Blazing World by Siri Hustvedt. Although it's not scheduled until August 28th, they are reading it in like three days. With my current reading speed, I may have finished it by 31st... It's odd so far, but strangely engrossing.

Instructions for a Heatwave and The Professor I started just before Sam was born, and then they disappeared into the ether of 'books I'm reading that I've got distracted from' and made a reappearance when I sorted out the (one of three the same size) big bookcase last weekend. I'm fairly far through Instructions for a Heatwave and liking it, and I felt in need of a Bronte fix, but haven't got very far with The Professor yet. I will hope to be changing this this week!

I am still reading The Secrets of Happy Families and also an interesting book called Playful Parenting but I figured I'd limit the parenting books as I imagine that's not what most of you are particularly interested in, so I thought I'd just stick to the one that was relevant to the subject matter. The Reading Bug is written by Paul Jennings, who wrote a load of books with exclamation marks in the title, which were everywhere when I was a teenager but which I never read any of. The basic argument presented in this book is that in order to have kids who love reading, you need to make it not be a chore for them. Jennings says that in the same way that we don't teach kids to speak, their first memories of reading shouldn't be when they are taught to read in school. If we make positive associations for our kids with books from as early as they can remember, they will actively want to read rather than feeling forced to, and although certain aspects of reading in school aren't always fun, hopefully they will always come back to their love of stories at home. Makes sense to me!

I aim to have read more than three of these by my next post!
Posted by anarmchairbythesea at 20:06