This Week I Have Been Ninja'd...

Ok so maybe ninjad isn't a word, but it should be! This month has been a bit awesome for the acquisition of books, so much so that it needed to be split into two posts. There is another upcoming post revolving around the books I got for my birthday/the birth of Sam, but I thought I'd do this one first mostly because I still have quite a few pounds of Waterstone's vouchers to spend from my birthday!

This week both of my parcels for the Summer Ninja Book Swap arrived and they were both amazing, I'm feeling incredibly lucky. In case you're new to the blog and have no idea what the Ninja Book Swap is, it's basically like a bookish secret santa for bloggers but runs at Valentines, Summer and Halloween rather than just Christmas. You can find out more details here and if you're interested in receiving a reminder email with the sign up info once sign up opens for the next one, just email us at ninjabookswap(at)outlook(dot)com and we'll put you on the list!

So anyway, onto the goodies! My first parcel showed up the day we arrived home after a day out to find this lot waiting for us:

As you can tell, I was a little bit excited! Apologies for how rough I look, Sam was about a week old :-p

Here's parcel number one, from the lovely Kelly of Paper Obsessed: 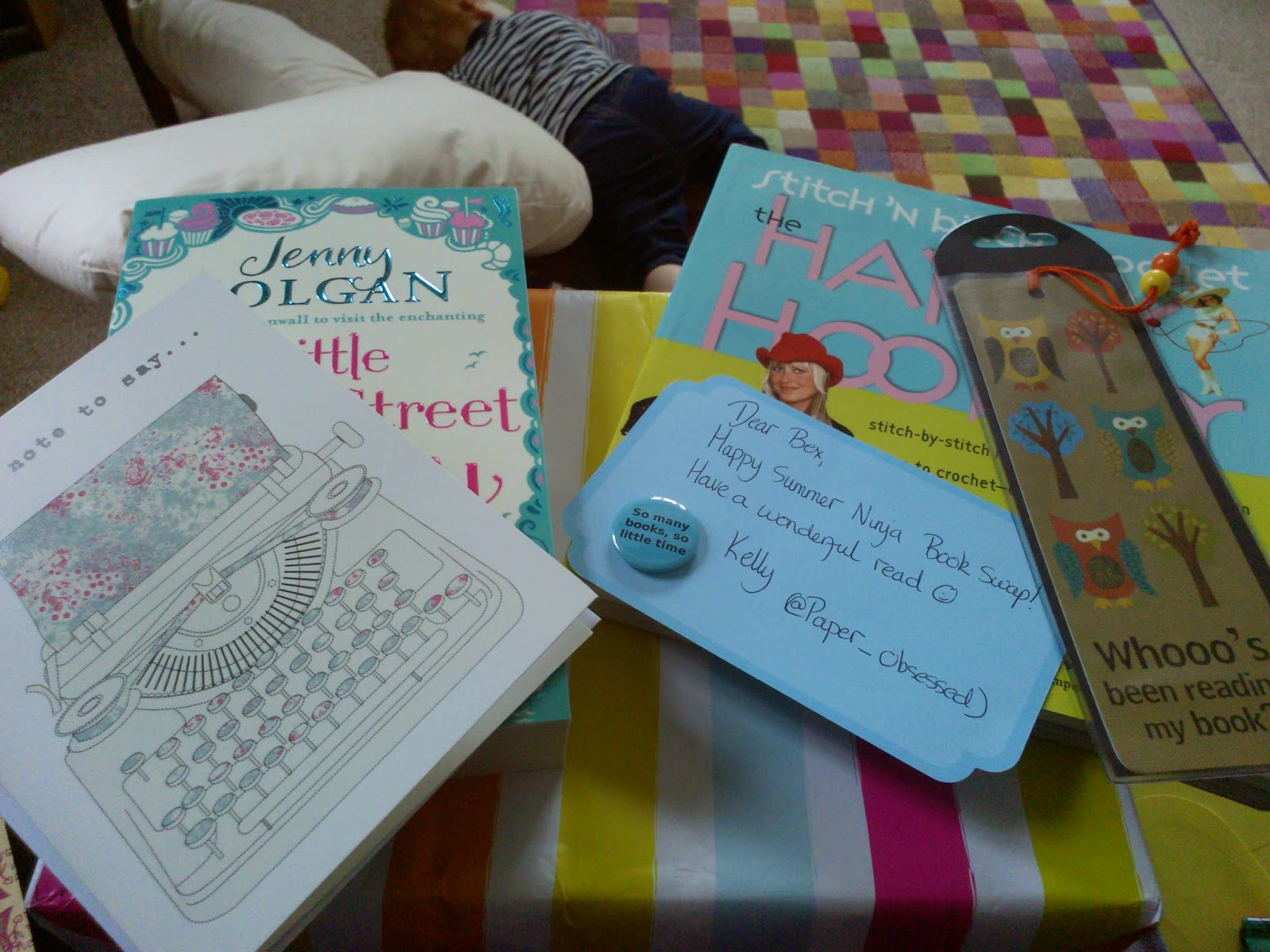 I have to admit I did actually, physically squeal when I opened it to discover Stitch n Bitch Crochet: The Happy Hooker, because I borrowed it from the library a while back but really learning to crochet from a borrowed library book isn't the greatest and I'm super excited to attempt to teach myself again now that I own it! It has some gorgeous patterns in it, because I need more projects, obviously! As well as that the parcel also contained Little Beach Street Bakery by Jenny Colgan which I've already finished and which has been perfect reading for the 3am feeds with Sam, a lovely notecard which I will probably use in a future swap parcel, a 'Whooo's been reading my book' owl bookmark and a little badge saying 'so many books,so little time' as well as a lovely little note. Thank you so much Kelly, I loved everything in my parcel!

I had a few days to calm down from that one before my second parcel arrived. This one was sent by Leanne (@_BookClub) and everything was inside this super awesome bag: 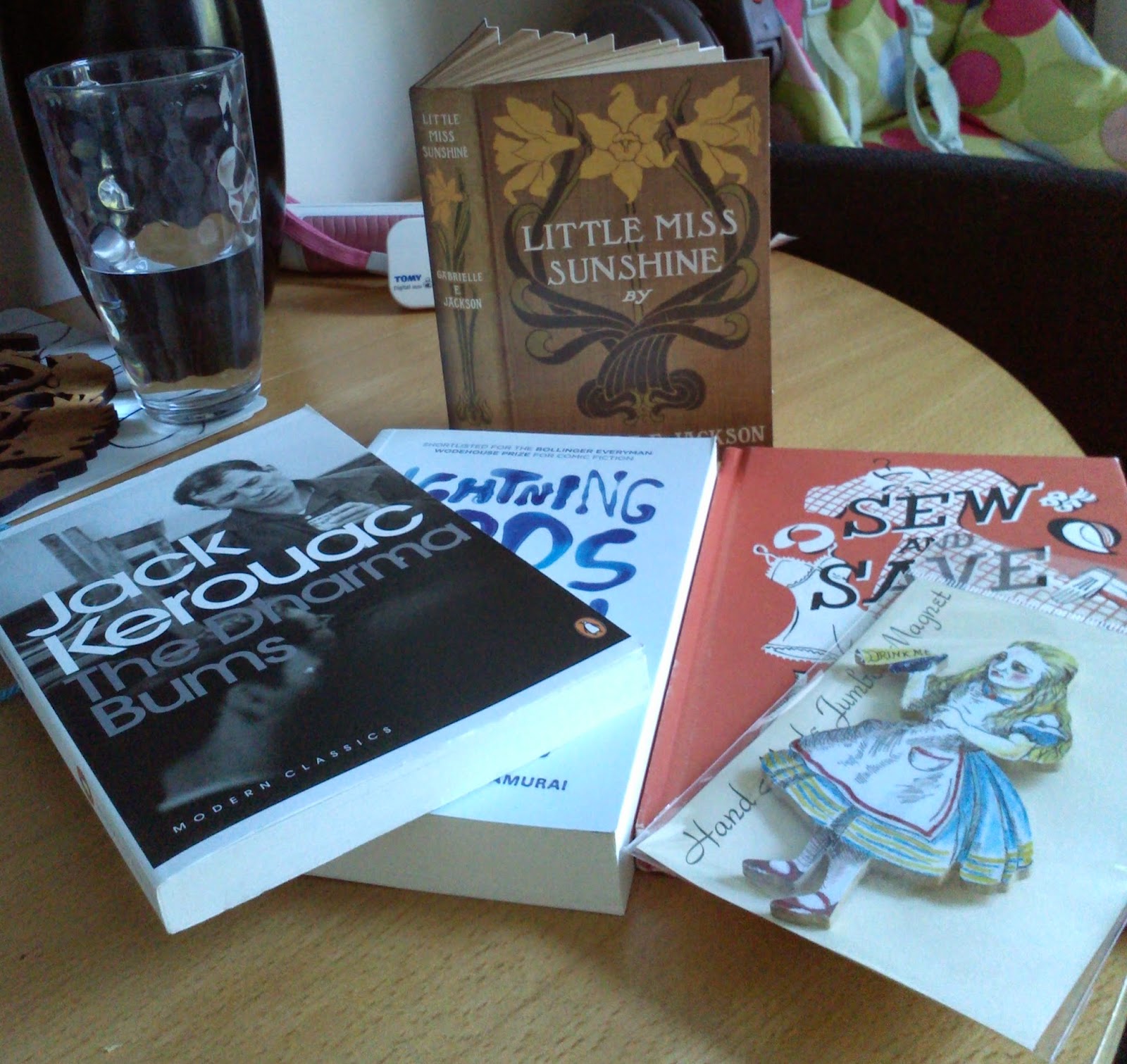 I've been so lucky with my parcels, once again. This parcel contained an awesome book card, an Alice in Wonderland fridge magnet which was perfect due to my love of both Alice and keeping everything on the fridge,  Lightning Rods by Helen DeWitt and The Dharma Bums by Jack Kerouac which has the honour of being the book which started my wishlist years ago so it's amazing that I finally have it! And also a little book called Sew and Save which is a collection of reproductions of the government issued booklets on clothing during the Second World War and it's great!

Both my parcels were amazing and once again I've had an amazing Ninja Swap experience! Thanks to both my lovely swap ninjas, you've made me feel very spoiled! :-)