I think that the biggest shock for me after having Benji was how much of being a parent doesn't come naturally. Obviously the instinct to look after him, keep him washed/fed/in bed at a decent hour, play with him etc was there from day one, but personally I feel like it's taken me a while to adjust to the fact that parenting is a thing that I have to learn to do well, much as with any other skill. Yes, it's enough to just get through days and some days all you can do at the end of them is be grateful that you're all in one piece, but for the vast majority of days I prefer to have some ideas about creative activities we're going to do, places we're going to visit and groups to go to. Also I'm trying to develop an awareness of what I'm trying to achieve as a parent, rather than just scrabbling about on a day to day basis. Overall I'd like my kids to be happy, sociable, polite and confident little boys. A lot of the time I feel ill-equipped to deal with some of the more challenging behaviours exhibited by Benji, and so in pursuit of the knowledge that I hope will help me to shout less and actually resolve issues successfully more I've decided to read one parenting book a month. Because when I feel like I don't know how to do something I read about it, obviously. 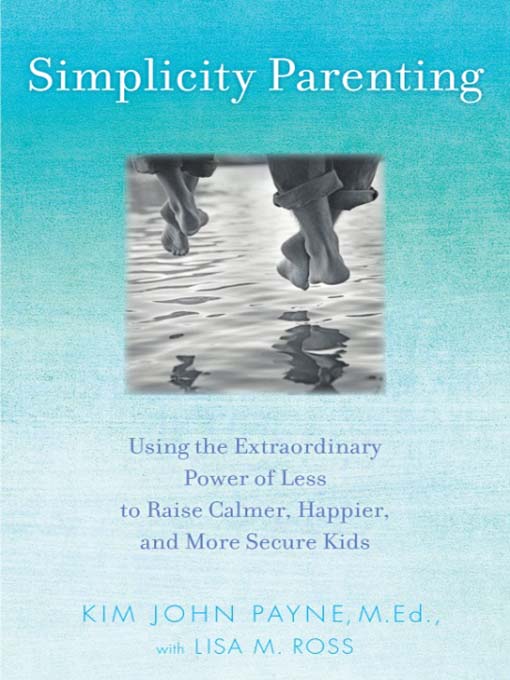 I will admit that before starting this book I was incredibly sceptical. I thought it was going to be a 'sell all your stuff and live in a barn' kind of book, but actually it was brilliant. The basic idea behind it is that kids in our society today suffer from too much of pretty much everything - too many toys, too much information, too many activities, too much scheduling and definitely not enough free time. The book is broken into four parts: environment, rhythm, schedules and filtering out the adult world, and in each the author addresses aspects associated with the topic.

In principal I totally agree with pretty much all the points he makes. My children have a silly amount of toys. When you can't see the bottom of the toy box or close the lid, it's time to get rid of some! Payne argues that when children have too much choice it causes them to become overwhelmed and actually makes them less able to focus and make decisions, which seems to make sense to me. While reading this book I did actually clear out at least half of the toys from our main toy box and put them in a box in the cupboard which immediately made me feel better because there was less clutter in the front room, and meant that Benji actually plays with quite a lot of what's there now. I may reduce it by half again this week because he still can't easily get to the bottom of the box! My thinking is that in six months time or whatever, I'll bring the toys I've stored out and swap them with the ones which are there at the moment. It will be like having new toys but without having to buy anything!

The chapter on rhythm was really interesting for me. When I was a kid we always had set things happen on set days because my mum stayed home with us, so she mostly picked us up from school and then on certain days certain things happened, like on Wednesdays we had 'sweetie day' where we each got 50p to spend on penny sweets on the way home, and on Thursdays she had piano pupils so we went to my Grandma's house where we would always eat cheese on toast and apple pies. The argument here is that many kids today don't have this sense of structure and certainty in their weeks as their parents often both work long, unpredictable hours and/or have to travel unexpectedly or just a lot with their jobs so it can be difficult to plan ahead of time for things to be the same on a daily/weekly basis. This made me think about whether or not Benji has had this kind of rhythm and structure in his life so far. We have weekly activities we mostly go to, but generally I think we're only just starting to establish this. For example we finally accepted a few months ago that if we want him to have table manners we should probably eat together, sitting round the table, with the TV off as he's so easily distracted it's impossible to keep him interested in his dinner if anything else is happening. Since finishing Simplicity Parenting I've been trying to get him to eat and sleep at similar times each day (he's had an established bedtime routine since he was five weeks old, but nap times fluctuate) and set up a regular activity to go to at least three days a week. The rest of the time we go for walks or to the playground or either of the local attractions that we have annual memberships to, or swimming or whatever.

There was a lot in the book about how adult information floods kids' worlds without us even realising it. In our house we don't often listen to or watch the news because it makes me infinitely depressed about the state of the world, and if I find it difficult to deal with how overwhelming must all that bad news be for small children? It really made me think about the topics Rhys and I discuss while Benji and Sam are around (but especially Ben, who understands way more than people think) and realise that we need to start adjusting our conversations and keeping certain topics for when the kids are in bed!

One thing that nearly made me stop reading was the bit where it says that children should only have - I forget if it was six or twelve - books. For all the same reasons - overwhelm, inability to make choices etc, but still,  part of me was immediately like 'step away from the book!', but then I thought about it and despite the fact that I'm never going to agree that a child should only have six books at a time, probably it actually is quite overwhelming for Ben to have a floor to ceiling bookcase packed absolutely to bursting with books. I'm thinking about swapping his bookcase for a smaller one and doing a similar thing to what I've done with the toys.

Overall this was a really interesting read and I feel like I took a lot away from it which will help me to feel more in control and hopefully make the kids calmer. I might even try to buy a copy,as this copy was from the library.
Posted by anarmchairbythesea at 21:56