My last few days of Bout of Books have been totally rubbish, and while that sucks as I'd hoped to read lots every day while it was on, I have lots of good reasons.

We've been in London visiting family and on Friday my mum looked after Benji all day so Rhys and I could have some 'alone time'. As we had quite a few theatre tokens saved up and are both massive musical fans, we decided to head up to Leicester Square and see what we could get tickets for on the cheap, and then I remembered that the Comics Unmasked exhibition is on at the British Library at the moment and I haven't been to the British Library since it relocated from the British Museum which was apparently in 1997 (!!) so obviously we had to go.

Day started off with a minor glitch, as we were planning to use the 2 for 1 ticket offer for the exhibition, which requires the use of a National Rail type actual paper train ticket and they've changed the zoning on travelcards since the last time I bought one. This *might* have led to a minor strop at the station, for which I entirely blame my pregnancy hormones and not my levels of maturity. at all.

So anyway, once that was sorted we got overly excited by the power of being able to use all the types of transport and go pretty much anywhere we wanted, we randomly jumped on the train to Paddington and went to find.... Paddington. Unfortunately I do not have a picture of him, because he was surrounded by people drinking coffee, but he's super cute and little and awesome. So that was a good start.

The morning we spent wandering around Covent Garden, visiting Pollock's Toy Shop which just inspired us to make loads of toys for Ben and the new little one, taking pictures of the Moomin shop for Laura despite being convinced she must have been there (she had), and getting pretty cheap tickets for that evenings' performance of Charlie and the Chocolate Factory. 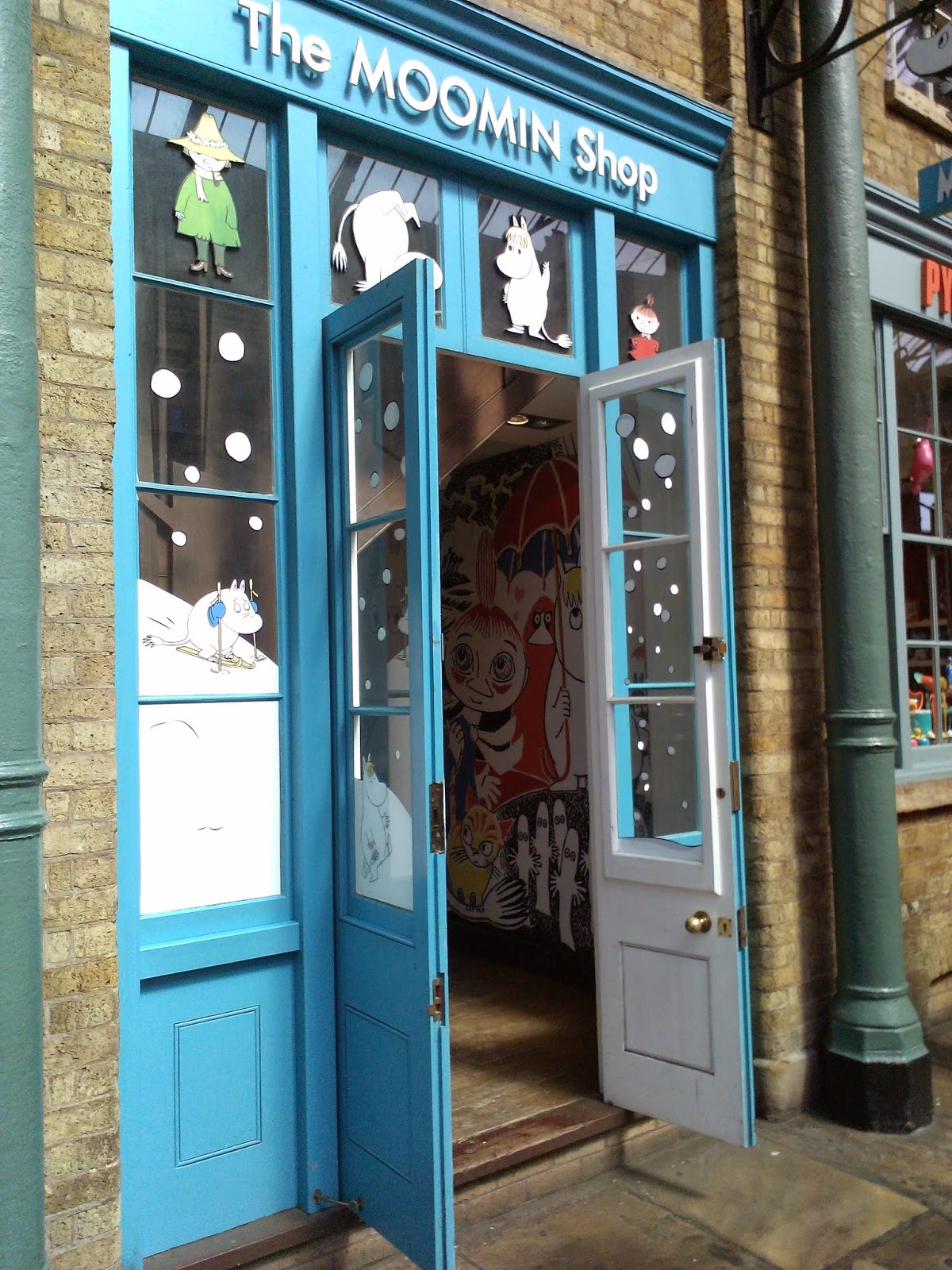 Because it was a gorgeous day we went to have our picnic lunch in Hyde Park and had a bit of a wander, and then Rhys convinced me to get on a bus (!) in Central London (!) to get to the British Library to meet my sister. I don't get buses in Central London despite growing up in Greater London, because I never know where they go and am worried I'll get lost. Anyway, we got two buses and didn't get lost and my eyes were opened to the wonders of bus travel... (not really, but it was better than I thought). 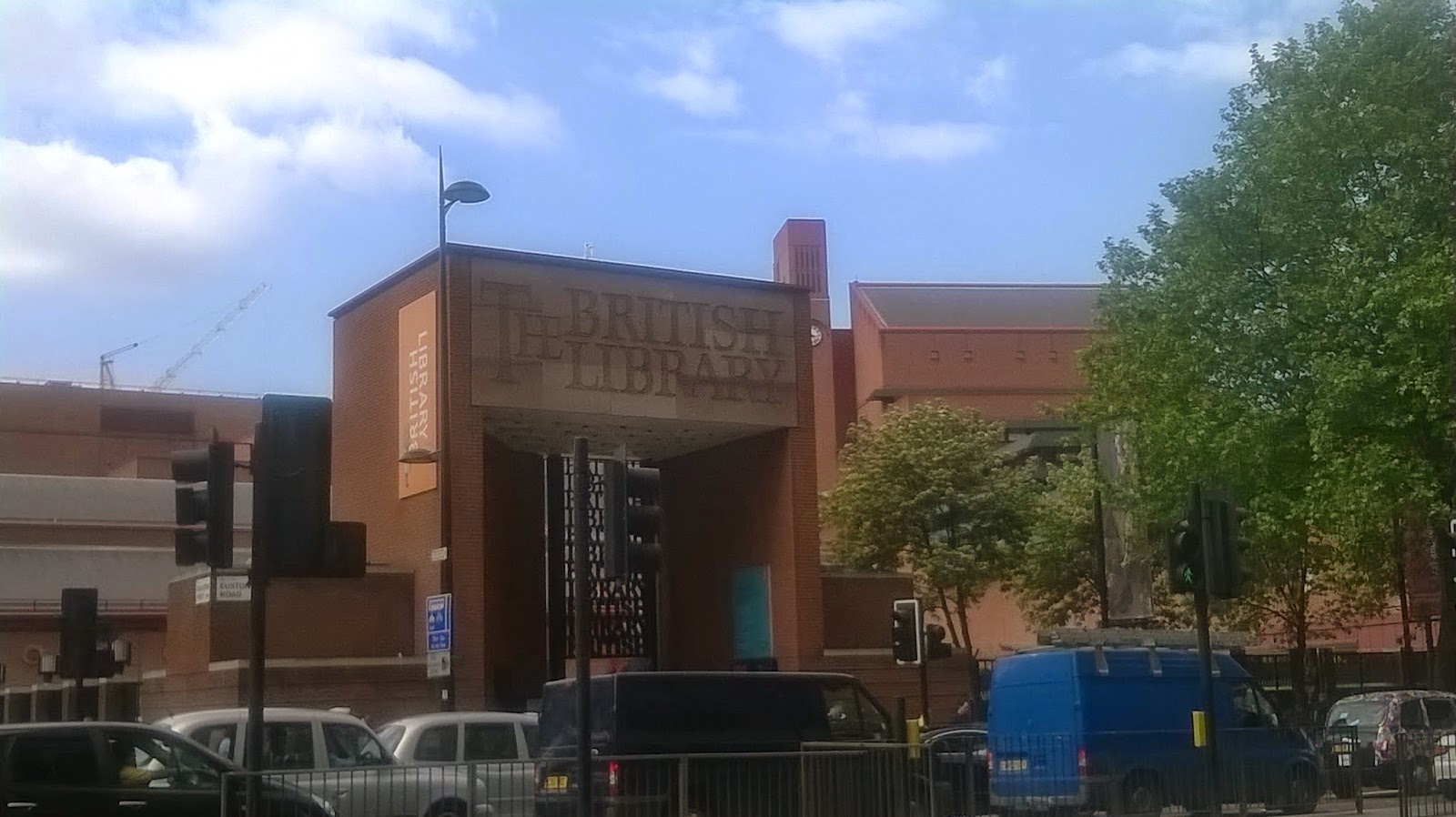 This is the British Library from across the road, and while we were waiting for my sister, who works up the road, we wandered up the stairs in the impressive entrance to see what a lovely shiny grand piano was doing there and saw a tiny sign tucked away in the corner saying that a few tickets for that evening's event with NEIL GAIMAN and DAVE MCKEAN had been released. Frantic moments ensued when we realised we already had tickets for Charlie that evening, so we rang round everyone we could think of who might want to see the fabulous Mr Gaiman, but nobody could go. I never thought there would be a day when I would pass on the chance to go to such an awesome event, but I did. To console ourselves we went into the exhibition, which is this one and if you have any interest in comics and are anywhere near London, I'd really recommend going and also checking out their programme of extra events which is pretty fantastic. Aside from the slightly creepy gangs of mannequins wearing V for Vendetta masks hiding round every corner, I added a large amount of graphic novels to my TBR list, including pretty much everything by Alan Moore, as all I've read is Watchmen and V for Vendetta. I did really well resisting all the graphic novels, books about graphic novels, and general literature related gifts in the awesome gift shop though, but then obviously we had to go over to the Forbidden Planet for a serious browse around their basement book department, during which time I picked up a silly amount of books and was (eventually) convinced to put them all back again.

To console me for my lack of books, we headed back to Covent Garden because we'd been craving burgers for a few days and this guy said that Meat Market in Covent Garden was awesome, so we went and he was right. This is me with our food. The chips had cheese and onions on them and they were literally the greatest. 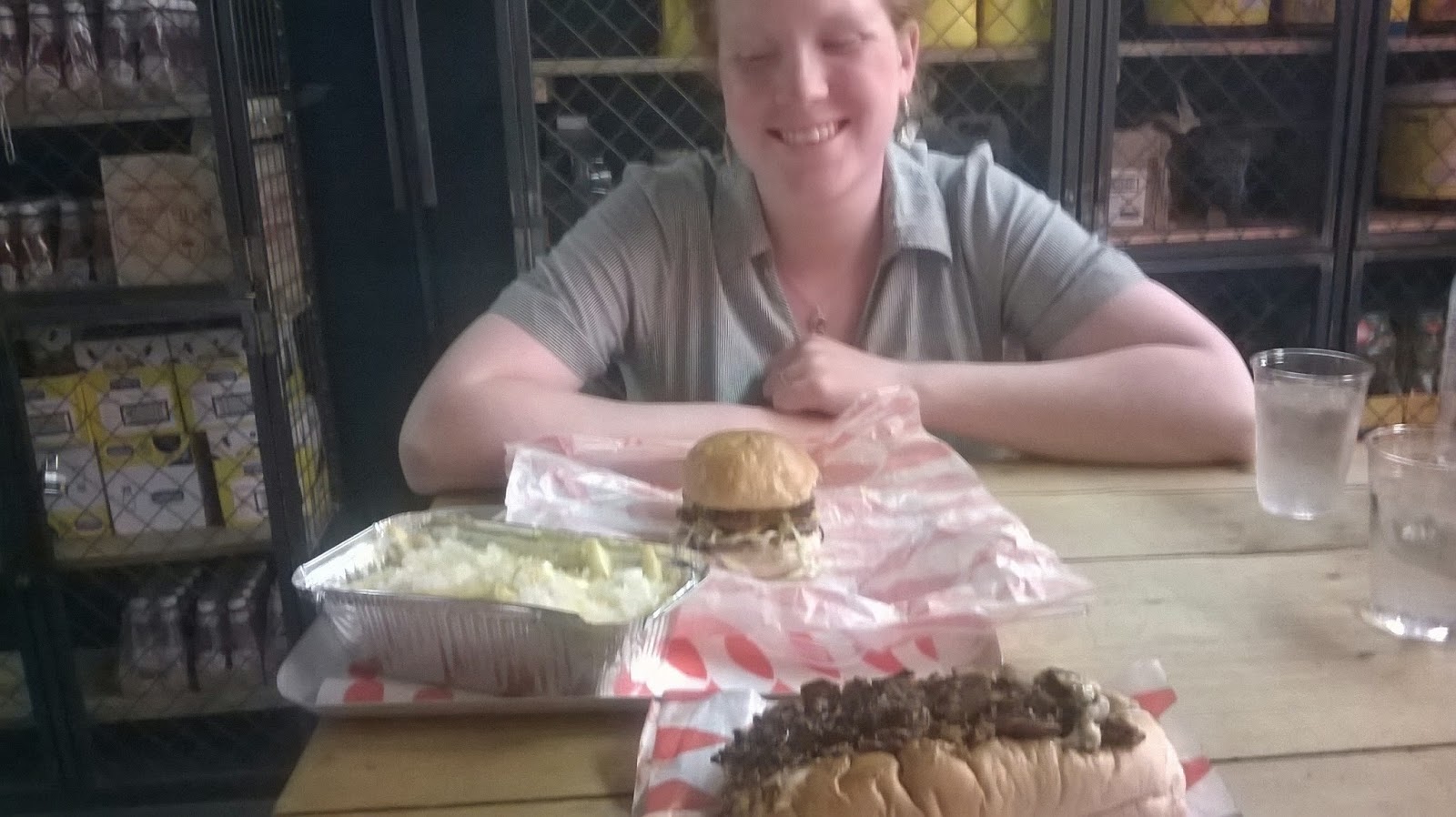 I had a cheeseburger and the one closest to the camera is a mushroom cheesesteak which was also incredible. Food was gorgeous and not badly priced for London :-) And finally! Charlie and the Chocolate Factory. If you like musicals, and are a fan of the 1964 Willy Wonka and the Chocolate Factory film, you should see this. It's beautifully staged and the cast was impressive, especially the beautiful rendition of Pure Imagination towards the end. Here's a spectacularly attractive photo of me with a programme: 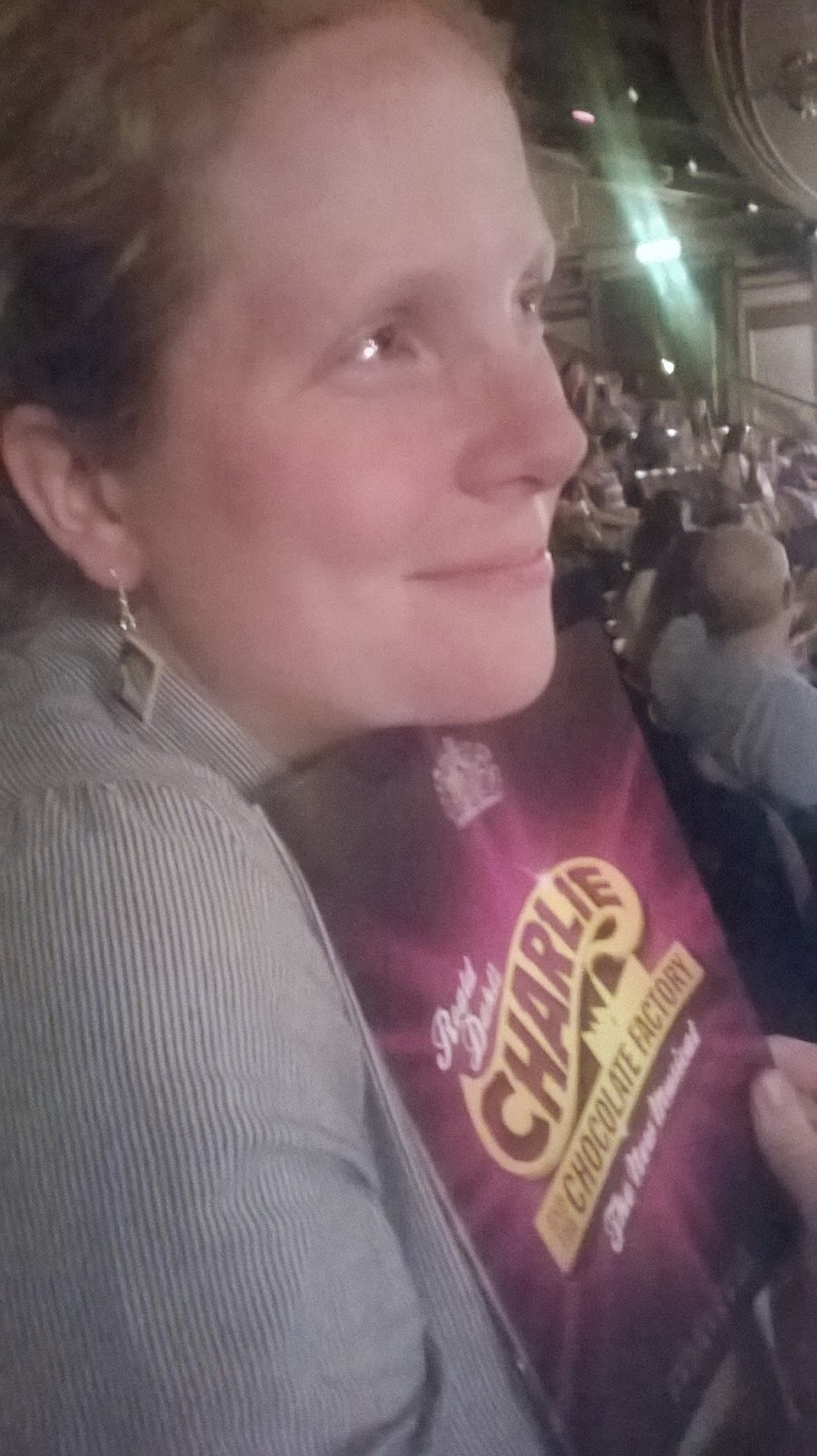 So that was yesterday. Today we went to Milton Keynes to meet up with a friend and while we were waiting for her we went to Collectomania, which Rhys used to go to when he was little with his parents, and we had a brilliant time. This is a picture of the hall full of stalls of graphic novels, comics and general memorabilia 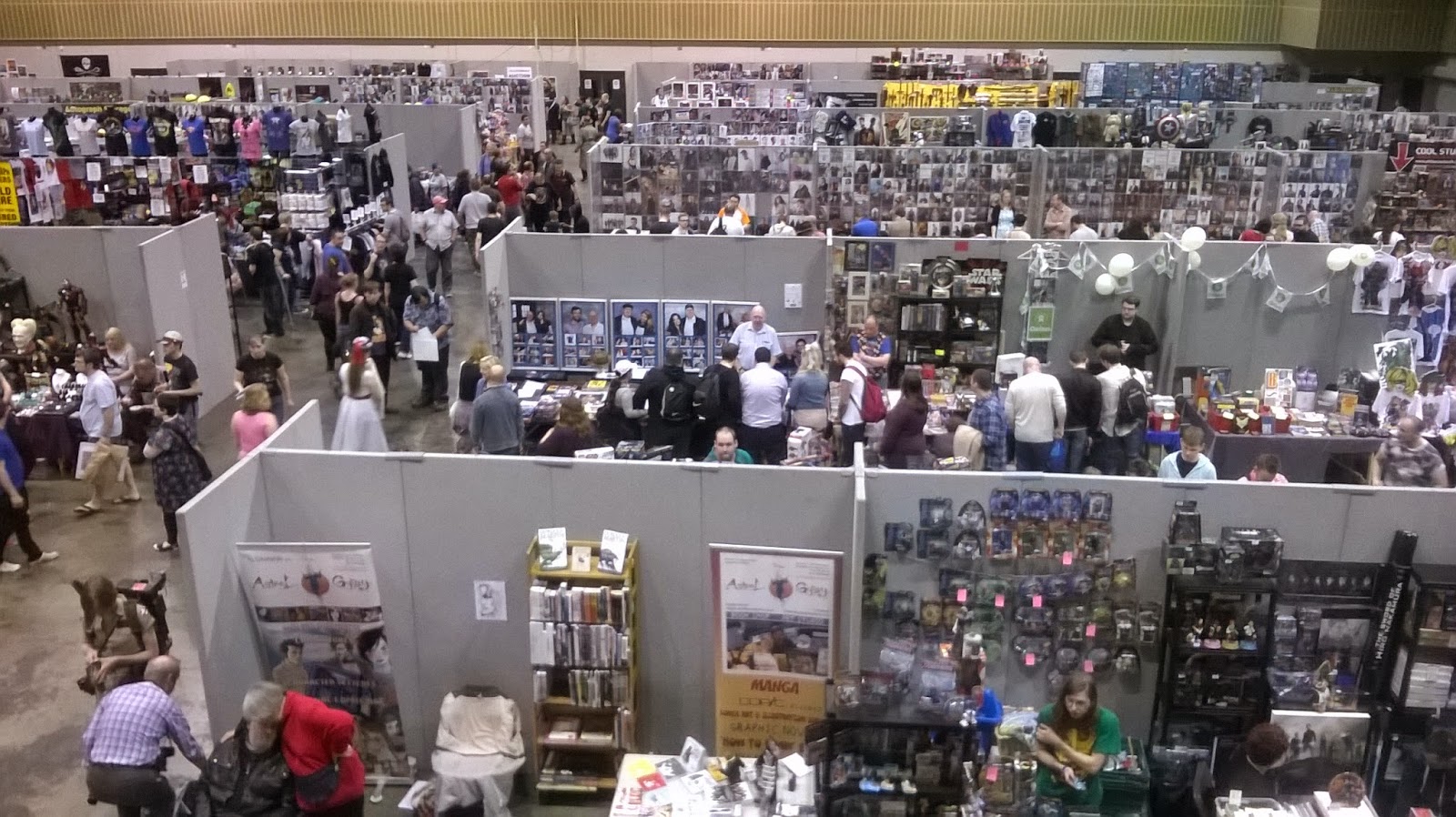 I found a lady selling graphic novels at 50% off and bought a couple, of which I am very proud :-) There is a photo on Twitter, which I won't post here because let's face it, there's probably enough pictures in this post! Then we went a hung out in the sun by a lake and Benji played with a little girl who's two weeks older than him and gave her a kiss and it was adorable.

So that's where I've been. How's everyone else's weekend?
Posted by anarmchairbythesea at 22:19