How I Fell Off the Book Buying Ban Wagon, Into a Heap of Books...

Let me preface this by saying that in my mind, I have succeeded with the task I set myself. I set out to beat 3 months without buying books for myself, and I did SIX. This is amazing to me. Unfortunately then we went on holiday, and I allowed myself to buy books 'just while we were away', which then turned into 'all the time, whenever I leave the house'. So yeah.

Before you all have heart attacks, this is my pile from the last two months, so it's not as bad as it looks... (it is missing a few of the children's books that I bought though,as I've put them away, and a couple I bought on holiday as my sister now has them!) 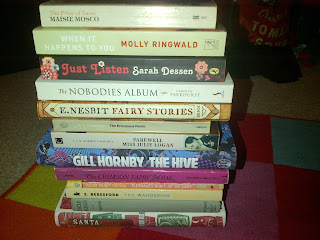 They're stacked weirdly because they're the result of several different shopping trips, so I will go from top to bottom:
So yes, that happened. I'm madly busy this week/month/year as (yay) my business has started to pick up a bit so I'm knitting like a madwoman, as well as which I'm taking a course on Coursera in Modern and Contemporary American Poetry, because I miss literature, as well as trying to read The Historian for the RIP readalong at the Estella Society and organise the Halloween Ninja Book Swap :-) I am busy, and I love it! There will hopefully be some reviews/bookish posts in between this madness. I will try to be here as much as I can, but in the meantime, who's excited about Halloween swapping? I know I am! Look out for sign up details which will be going up soon!
Posted by anarmchairbythesea at 20:14