Books on my Bedside Table!

It's been forever since I did one of these posts and I miss them. Mostly though I thought it would be a great way to mention a book that I just finished and loved but don't really have the motivation to write a full review of.

So, without further ado the books on my bedside table at the moment aaaaare: (from bottom to top) 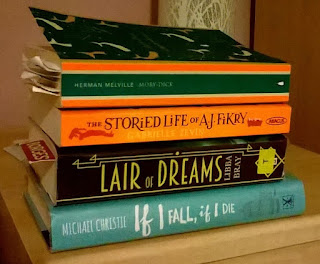 If I Fall, If I Die by Michael Christie - this is the book I just finished and loved. I picked it as my choice from the Giller prize longlist. I don't know if you saw but a while back I posted that I was going to try to read one long,shortlisted or winning book from each of several literary awards and this was the one for the Giller and oh my goodness was it a good choice. It's about a kid whose mother has agoraphobia and sort of won't let him leave the house (in as much as she's never expressly forbidden it but if he does anything even remotely dangerous she panics and so he's sort of intuited that he should stay inside) until of course, one day he does. He then gets involved in something he shouldn't have and ends up trying to solve a mystery with a Native Canadian Indian kid named Jonah so the book is a lot about the way that native people are treated in the town, as well as Will's mum's agoraphobia and also some of the tragic things that have happened in their past. It's set in a landscape about which I have little to no knowledge and I felt like the story informed me as it absorbed me. All the characters were fantastic and you should just read it now. So good.

Lair of Dreams by Libba Bray - I'm reading this for RIP and also because I put it on my wishlist months ago straight after I read The Diviners, before it was even out, but I'd forgotten how creepy the series is so I can only read it in small amounts early in the day, because I'm a total wuss. It's kind of taken a backseat to Moby-Dick for now but I will definitely be getting back to it soon!

The Storied Life of A.J Fikry by Gabrielle Zevin - I had this on my wishlist for ages and then Sarah got it for me for the Mini Ninja Swap recently and the cover is just gorgeous and it's about a bookshop and,well, sometimes you don't feel like reading Moby-Dick in bed! I'm only a few chapters in but I'm liking it so far.

Moby Dick by Herman Melville - I'm reading this for Hanna's readalong, as you may have seen. So far I'm actually keeping up and enjoying it more than I thought, which is great. I'm aiming to try to get each week's chapters read by Tuesday or Wednesday but failing that I'll make it my work book and take it on the bus with me on the two days I work. I reckon I'll speed through it that way!

Running Like a Girl by Alexandra Heminsley - You will notice that this is not in the picture. That is because I have temporarily misplaced it, but it was my bedtime book before I started A.J Fikry. Charlotte read it a while ago and raved about it and I've been really enjoying it so far. It's making me want to run again...

Yes, as usual I am in the middle of way too many books, but it's nice to keep track and remember what I thought about them! What are your reading at the moment?

Labels: books on my bedside table