Inspiration on Monday is a link up hosted by Trish to encourage us to share our creative projects and things that inspire us!

Meal planning is a bone of contention in our house: we want to do it, we know that everything works better and we spend less, waste less and shop better when we do it but our previous method, of trying to pluck seven dinners out of thin air and write them on the calendar at some point on Saturday or Sunday so that we could do the grocery shopping on Sunday, our only day together as a family just wasn't working. I'd found a couple of ideas I liked on Pinterest, obviously, and particularly liked the look of this one and as we'd bought a frame for something that ended up being a little too small I thought now was as good a time as any to finally give it a go! 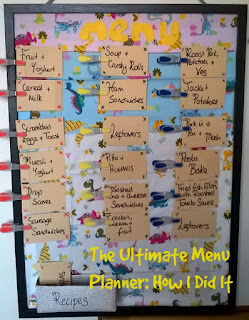 All the credit for the idea goes to The Thinking Closet whose image I originally pinned, and Clair Dickson whose original idea it was.

I started with a wooden frame with a plastic sheet meant to frame a poster. My original plan was to cover the frame with pretty paper and take the plastic sheet off the front, but then I remembered that I had lots of cute dinosaur material my mum gave me for Christmas so I thought I'd use that instead. My plan was almost scuppered by my staple gun running out during the attachment of the pink piece of material, but sellotape saved the day resulting in (as always with my creative projects) a bit of a botch job at the end, but it holds up so I'm happy! 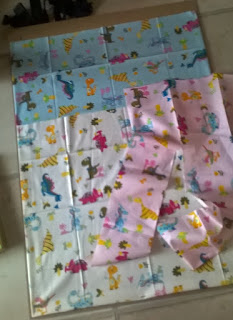 I made the little box for the extra recipe cards from the bottom of a Weetabix pack covered in some pretty paper. I am planning to make a second box next time we have an empty box because the eventual plan is to have all the recipes we ever plan to use hanging out in the boxes just waiting for us! 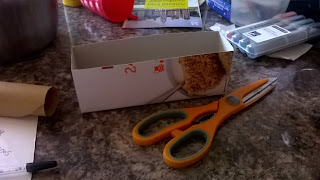 Here's where I deviated from the original. We decided that there was no point in us just planning dinners as we just end up eating really boring breakfasts of cereal all the time and cheese sandwiches for lunch and then we forget to eat because we're so bored by the idea and then we get stressed and yell at the kids and it's just a bad plan, so I modified the concept slightly to allow three pegs per day: one for breakfast, one for lunch, one for dinner. I used superglue to attach the pegs to the frame and fabric and cut the letters for 'menu' from felt and glued them on. At this point I also had a slight panic moment when I managed to glue one finger of each hand to the same tube of glue and took a good five minutes of rinsing under the tap to get them unglued again... Suffice to say superglue and I aren't friends anymore!

After that all that was left was to make the menu cards which I cut to size from big sheets of card my father in law gave me a while back. I just used a marker to write the name of the dish on one side and a biro to write the ingredients needed on the other side. This makes it super easy to make a shopping list as you just go through all the ingredients and add what you need. It's probably my favourite thing about this menu planner.


At the moment we only have the meals for this week plus a few other breakfast ideas, but as the weeks go by we plan to add lots of old favourites and some new recipes to our boxes! I like the idea from the original post of using recipes from one box and replacing them in another box and so circulating them so you've not eating anything all the time. Overall I really love how it turned out and I'm super excited to use it. We did our first shop from it today and it seems like if all goes to plan it should be a really exciting week foodwise!

Do you menu plan? How do you do it?
Posted by anarmchairbythesea at 07:00