So Christmas happened and it was awesome despite some ridiculous wind in Kent on Monday night while we were trying to get to London, but due to our ninja skills (for which read the fact that we know that the Congestion charge ends at 7pm and so went straight through Central London instead of sitting on the M25 which was at a standstill like everybody else) the journey only took about ten minutes longer than usual and we didn't blow off the road at all, so that was good. I got a lot of books this year, but actually I have something more important to tell you all. Some of you already know and some will have seen it on Twitter, Facebook or whatever, but this is my other big news and also part of the reason I've been a rubbish blogger lately! 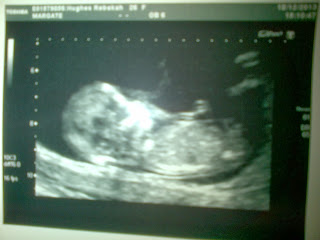 The photo is horrendous because I took a photo of the scan photo on my phone, buuuuuuuut it's a picture of baby number two who is due mid June :-) Four days after my birthday, to be precise, so keep your fingers crossed it's either on time or late because I really don't want to spend my birthday in hospital! We're all very excited, as well as being slightly overwhelmed and terrified at the thought of how we will cope with a newborn and a 20 month old, but we'll cross that bridge when we come to it! Everything's going well so far, the baby has all the organs and limbs its supposed to at this point and I've just been feeling knackered, but so far so good!

So now onto the books! This picture is missing a couple, because I couldn't find them, but here's what I got: 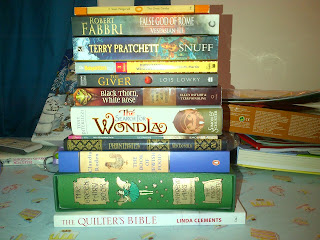 From bottom to top:
I also got and have already read but now can't find Attachments by Rainbow Rowell from Laura. Once I find it there will be a review, because that book is amazing.

And that's it for now I think! I got lots of other stuff for Christmas which we're currently trying to fit in the house. If you want to see a picture of the gorgeous quilt my aunty made for Benji, pop over to the craft blog! I'm also ridiculously proud of myself for finishing A Tale of Two Cities just before Christmas and am thinking I might make reading Dickens in December a yearly thing. What do you think? How was everybody's Christmas and what books did you get?