THE NORTH, People Who Do Indeed Have Faces and (of course) Books!

Ok, so Ellie and Laura have both already written about this, which is great because it means that I can just do the short version. Not that I'm lazy or anything, but Benji's been up since 6 today and 4:45 yesterday and then I was at a craft fair all day yesterday (which went ok for those who want to know - we made back our table fee plus a bit of pocket money so better than we'd expected!) so I'm knackered!

Basically, last Tuesday Laura and I headed up to the vast and ominous NORTH (which is only vast and ominous if you are one of those people who has never left the South of England ever) to see Hanna again and meet Ellie and Charlotte for the first time :-) This was very exciting for a number of reasons:


It was an amazing day. If you want the long version you can read about it here and the slightly less long but with more of the train delayedness here.

What I'm here for, though, is really to show you all (but especially Ellie who is particularly curious) what I bought! We were all in such a frenzy of buying books and being with other people who fully supported the buying of books that we weren't paying too much attention to what each other was actually buying, which was thus: 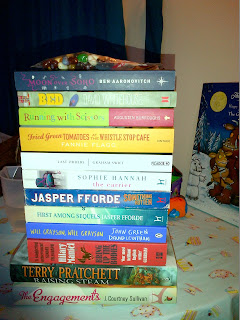 That's a bad photo. Here are some more broken down ones: 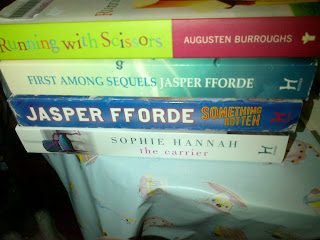 This isn't a much better photo, but never mind we'll make do. On the top was my only charity shop buy of the day, Running with Scissors by Augusten Burroughs which I heard a lot about a while ago (can't remember why) and liked the sounds of, so I'm excited to start it. Plus it was bought in a charity shop where all the books were squished into one tiny corner and so we had to upset an old gentlemen trying to squish our five selves plus bags in to have a proper look. So that was fun. The three underneath were on the 3 for £5 offer in The Works. The two Jasper Fforde books were... heavily influenced by Hanna but I have been looking for more since I read The Eyre Affair way back before I started blogging, and The Carrier by Sophie Hannah (which I think Ellie also bought?) was because I needed a third book and Charlotte said it was great. I'm looking forward to it! 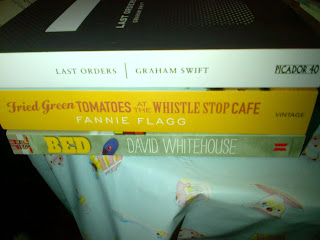 HMV was next, and I haven't seen a HMV with as many books as they have in the Leeds one for quite a while! I kept picking stuff up and putting it down again and finally ended up with these. Last Orders by Graham Swift is another I heard a lot about from various people (possibly a sister or two?) a while ago and it sounded fun plus I quite like the front cover and it was only £1.99 so how could I not? Fried Green Tomatoes at the Whistle Stop Cafe is a brilliant film so I'm super excited about reading the book. I will be thinking about Mary Stuart Masterson throughout (not in a creepy way, although kinda cos I want to be her in Some Kind of Wonderful. She is all the awesome), and Bed by David Whitehouse for no reason other than that it was 99p and sounds kind of cool.

We made a quick stop at Candy Hero, where I bought a load of Jelly Beans that you can see in my main picture, and where I resisted buying more chocolate Tea Pigs, because we already have 8 types of tea in our house and that really should be enough, right? Anyway! Then it was time for Waterstone's! I haven't bought a new book in a while, and despite having left my £10 gift card in Kent (because I'm stupid), I got swept up in the excitedness of the moment and ended up with this lot: 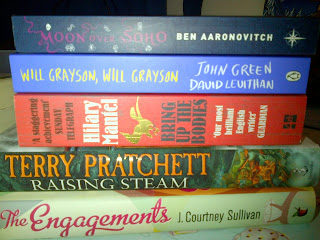 The picture lies a bit, because Moon Over Soho actually came from the Canterbury Waterstone's the night before. I was reading Rivers of London and was nearly at the end of it with a 2 hour coach journey coming up, so some emergency book shopping was needed! So only the bottom four are actually from Leeds, and only three are actually for me (stop rolling your eyes, Laura!), because Raising Steam is my Dad's Christmas present. It's an annual tradition that I buy him the newest Terry Pratchett and then 'test read' it (carefully, obviously) before giving it to him. So that just leaves Will Grayson, Will Grayson by John Green & David Levithan, Bring up the Bodies by Hilary Mantel and The Engagements by J. Courtney Sullivan which I had to have despite it being hardback because Maine was so good, and I did start reading it on the train home!

Those were my books, and here are a few pictures of various of us in various places :-) 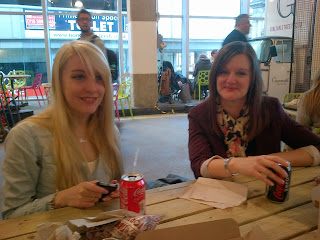 Hanna and Charlotte, having faces before shopping 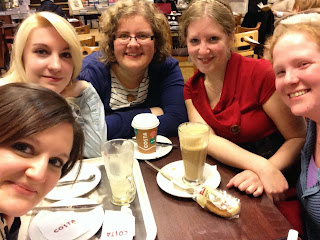 All of us, photo by Charlotte whose arm may have nearly broken off trying to get a decent one! 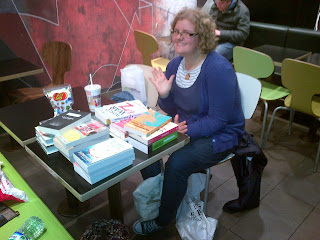 Laura with her books and mine at the station... we have no idea how there came to be so many...

So basically I had a great day! Those I had previously met were as lovely as remembered and those I hadn't were as lovely as I thought they'd be :-) It was amazing to meet people and instantly feel so comfortable with them and like we'd known each other for ages, which I guess we have! And really nice to be able to put faces and voices to blogs and tweets. It must be done again soon.
Posted by anarmchairbythesea at 16:25