This was going to be my Saturday post, but then I posted about Neil Gaiman instead, so it's now a Sunday post instead. This week was eventful.... Most of it was pretty hectic, as we were in London for Benji's birthday party on Sunday, then back to Kent so I could work on Monday and then back to London Monday night so we could go to the Neil Gaiman event on Tuesday and back to Kent Wednesday and I was at work again on Thursday. In between that I had a gigantic row with the library due to them randomly telling me I was 'barred from using the library' after I placed a reservation on a book which took my fines over £10. Because we'd been away and I tend not to pay too much attention to my overdue books, I hadn't realised that my fines were anywhere near that - the last time I'd been to the library previously they were about £5, also on the day that all this happened I'd been up since 5.30am with Benji and so inexplicably read 'barred' (which I still think is a bit harsh and unnecessary) as banned and flipped out. I didn't find out that the reason it was barred was because of the fine being 23p over £10 until I'd conversed with a couple of (to give them their due really lovely and understanding) librarians and at no point did they tell me it was a temporary suspension. It was like somebody telling you you're banned from your local pub that you go to every night and where you meet all your friends. The library's my safe place, and lack of sleep didn't help me to be calm about the idea of that being taken away.

Anyway, once I'd resolved that by paying my fine on the way home from work Thursday night (with a very amused librarian who knows Benji and I laughing at me for having such a massive fine) and dragged 15 library books back on Friday, there wasn't much time left for anything else! Having said that, though I did manage to somehow post twice this week, once about the Neil Gaiman event and also a sign up for my A Tale of Two Cities Readalong in December. If you've not yet signed up, you should!

I've also read Rags & Bones: New Twists on Timeless Tales, a collection of various awesome authors' interpretations of classic stories, which was sent to me by the lovely people at Headline, who had obviously remembered my love of all things Gaiman after I sent them an extremely fangirlish email regarding review copies of The Ocean at the End of the Lane (there were none left, obviously). It was amazing and I'm in the middle of writing my thoughts about it, which will hopefully appear later this week. I've also almost finished The Fearless Treasure by Noel Streatfeild and started Mothers Raising Sons by Nigel Latta (the book which caused all of the library fiasco), which is brilliant so far.

In non-book related things, I've been making things for my first craft fair in November. This week I've mostly been making balls, they're great for little babies but it's been difficult keeping Ben away from them! I've made various colours but this is my special favourite at the moment :-) 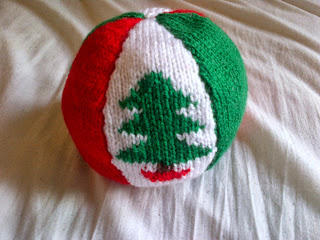 And because you haven't had one in a while, here's a picture of Benji enjoying his birthday cake: 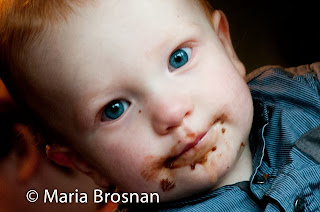 Taken by my wonderfully talented friend Maria. The London based among you should use her to photograph all your events, the girl makes everyone look good!

Happy Sunday everybody!
Posted by anarmchairbythesea at 09:59