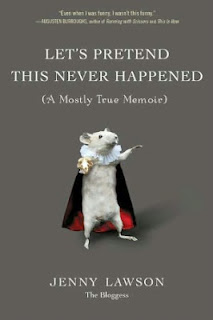 People have been telling me to read this book for a really long time. They keep telling me I'll love it because of the immense love that I have for How to Be a Woman, and although I still don't quite understand the need to make the covers so similar (the cover on the book I actually read has lettering incredibly similar to How to Be a Woman), they were so, so right. Just to clarify, the book is similar, but only because both talk very openly and hilariously about stuff that often makes people uncomfortable. Disclaimer over.

For anybody who doesn't know, the author of Let's Pretend This Never Happened Jenny Lawson blogs over at The Bloggess and let me apologise straight away for the fact that purely by including the link to her blog, I've probably lost you anywhere between 1 and 5 hours of your life. It's amazing and hilarious and part of the reason why I've been so desperate to read this book. She suffers with depression and anxiety disorder among other things, and she blogs about it ridiculously openly. People come to her blog and relate to what she's saying and realise that they aren't alone with their problems and it is generally a very 'reaffirming your faith in people' kind of place. The book is the same.

It's not so much a coherent narrative as sort of mini essays and bits and pieces about her life. It does follow an autobiographic pattern, as it begins with her childhood and goes through her marriage, the birth of her daughter etc. I loved her description of the experience of giving birth, because I believed it. In the past few months I've had a lot of people tell me their birth stories and sometimes you just know they're niceing (totally a word) it up for you because they totally think you won't be able to cope with what really happens, but Jenny Lawson says it will all be worth it, and I believe her. There is a lot in this book that may make people a little uncomfortable. My husband told me (after the fourth time I passed him something hilarious that he absolutely had to read) that he didn't think he 'gets her sense of humour'. I think I said something like 'remind me again why we're married?' and spent three hours apologising and feeling really bad, because he's lovely and it's not his fault that he doesn't find writing people notes on your cat as hilarious as I do.

So, the bit where I knew I was going to like the book; the dedication.

It's about the surprising discovery that the most terribly human moments - the ones we want to pretend never happened - are the very same moments that make us who we are today...Because you are defined not by life's imperfect moments, but by your reaction to them

I really like this, and I've been telling it to people for years. When I was younger (around sixteen) I was in a situation (read; relationship) that was pretty horrendous in many ways. There was some pretty big, therapy inducing fall out from it, but now whenever people who knew me at the time ask me if I wish it had never happened I always say no, because if it hadn't I wouldn't be who I am today and I know that despite its awfulness it's made me stronger and better able to cope with some of the things that have happened since than I otherwise would have been.

I think I've just demonstrated the biggest difference between Jenny Lawson and me, because I write about stuff like that and people immediately feel they have to be all sympathetic and feel bad for me, whereas she writes stuff like that and somehow makes it hilarious and you end up sat in the bath giggling hysterically for about ten minutes about the phrase "No-one ever expects vaginal arthiritis (Or the Spanish Inquisition)". And then your husband comes to ask if you're alright and you explain and he looks at you like you're entirely insane.

The other thing that I really like about both Let's Pretend This Never Happened and about her blog is that she is really open about mental illness. On her blog she talks a lot about depression, and in the book she talks a lot about OCD and anxiety disorder. Having suffered with both depression and social anxiety disorder in the past I really appreciate when it doesn't make people uncomfortable. I loved that she just writes about how it affects her and it is entirely relatable. I have to admit that I've never ended up talking to strangers about necrophilia before, but I have spent a lot more hours than I'd like to admit hidden in bathrooms just to avoid having to talk to people.

Apparently I had a very personal reaction to this book, and so this post probably should have been entitled 'Reaction' rather than 'Review' for all the purists out there. I apologise for the soul-baring and promise that by the next time I do it I'll have learned how to be hilarious about it!

So there we go. I read the book, I loved the book, and now I have to go out and buy a copy of the book. I will probably also buy copies for lots of other people, because of how I do that when I love a book.

Other reviews can be found at Devouring Texts and Booking in Heels.