After seeing Hugo the other day (which is incredible, if you haven't already go see it now!), I decided on something I've been wondering about for a while. I definiately need to read more steampunk, and so of course I signed up for a challenge! 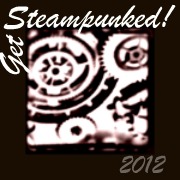 Hosted by Bookish Ardour, the challenge runs from 1st January to 31st December, and can crossover with other challenges. The definition of steampunk from Steampunk Lab is:

it [steampunk] refers to a genre of fiction where steam power, spring gadgets and modern marvels of the 20th century are thrown back to Victorian aesthetics. Technology in a Neo-Victorian setting. The term has spread on to include not just books, but any real mashing up of technology with more classical style, where Verne-esque and Wellsian science is a reality. Some post-apocalyptic elements rise up on occation, depending on the portrayal.

I am going to go for the Geared level, which is five books. I've made my list already but I'm hoping that I'll end up reading lots more than this!

These are the books I plan to read:
I may incorporate a re-read of Philip Pullman's His Dark Materials trilogy, as the challenge allows crossover books from the gaslight fantasy genre.
Posted by anarmchairbythesea at 19:39