I just wanted to mention another couple of challenges. As these two are both currently quite small, and really will help me towards my book buying ban, I thought I'd just do a mini post about both of them! I really will start posting proper content again soon!
Reading Shakespeare: A Play a Month in 2012 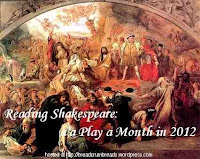 I’ve not read any Shakespeare since graduating over three years ago, and I think it’s time to rectify that! Risa at Breadcrumb Reads is hosting a Shakespeare Reading challenge, which I have signed up for. There was a poll, and these are the results. We are going to read a play a month in 2012! 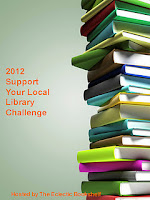 In keeping with my attempt to sign up for challenges which will help me to keep to my 2012 book buying ban, I’m signing up for the Support Your Local Library challenge, which does exactly what it says it does. Hosted by The Eclectic Bookshelf, the challenge runs from 1st January 2012 to 31st December 2012. Re-read don’t count, and obviously the books must all be library books! You don’t have to have a blog to participate, so go sign up for it!
With libraries so much talked about lately, and with the threat of closures looming large in my local area, as well as in the rest of the UK, it’s more important than ever to support your local library if we want them to be there for future generations. Personally I can’t imagine what my childhood would have been like without the library, so I’m quite vocal in my support for the saving the libraries!
There are four levels for this challenge which are as follows:
Level 1: Read 12 library books
Level 2: Read 24 library books
Level 3: Read 36 library books
Level 4:  Read 37+ library books
Originally I thought I’d come in at about level 2, but I’ve decided to be brave and dive in at the deep end, so I’m signing up for Level 4!

Here are the library books I have read:

You can sign up here. Libraries are an awesome thing!
Posted by anarmchairbythesea at 09:00