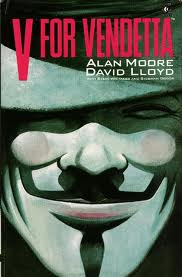 I borrowed this from my little sister (who got it for Christmas) for our Graphic Novel book club, for which we had the ingenious idea that whoever chooses the book for that month, has to buy it and circulate it to all the other members, so that there's only ever one copy of a book, as they're so expensive and difficult to get second hand (although charity shops are always worth a look!). This creates a bit of a problem, though, as by the time we get around to the meeting, half the people have forgotten most of what happens in the novel, but I guess you can't win them all.
I've been a big fan of the film ever since it came out, although my sister (different sister) will only let us watch it on November 5th, and although I now live in a different county, around 2 hours drive away, I still don't feel able to break that rule...
Never having read the book, I obviousy expected it to be similar to the film, although, having read a vast number of adaptations, I have no idea why I would think this, but there we go. It isn't.
There are, of course, similarities. For example, the characters, V, Evey, Mr Finch, Mr Creedey, are all there, and major things which occur in the book are obviously taken pretty much straight from there to the screen, however major other things are left out. In the book, the film's climactic ending of the destruction of the Houses of Parliament, has already occured. However, the book does place less emphasis on Guy Fawkes than the film does, and so the detonation at its' ending does not feel out of place within the story created by Alan Moore and Dave Lloyd. In fact, on having finished the novel, I felt that the ending was probably better, although not as strong or poignant, as that of the film. Simply said, the book is much less cinematic than the film, obviously, some may say. It is set over a much longer period of time, years, rather than months, but despite this, the complexity of the storyline is not more than the film. I didn't mean to compare this to the film, as I feel very strongly, in some cases more than others, that books which have been adapted into films, deserve to be viewed in their own light, as well as in comparison to the film, which is undoubtedly more well known, but in the case of V, it is hard not to compare.
The general consensus is that they both are amazing pieces of artwork. A sad omission from the book, but a stroke of genius on behalf of the screenwriter, is V's speech from the beginning. I leave you with these words.

Voila! In view humble vaudevillian veteran, cast vicariously as both victim and villain by the vicissitudes of fate. This visage, no mere veneer of vanity, is a vestige of the “vox populi” now vacant, vanished. However, this valorous visitation of a bygone vexation stands vivified, and has vowed to vanquish these venal and virulent vermin, van guarding vice and vouchsafing the violently vicious and voracious violation of volition.
The only verdict is vengeance; a vendetta, held as a votive not in vain, for the value and veracity of such shall one day vindicate the vigilant and the virtuous.
Verily this vichyssoise of verbiage veers most verbose, so let me simply add that it’s my very good honour to meet you and you may call me V.
- Hugo Weaving as 'V', V for Vendetta, 2006