Currently: May in Review

How how how is it the end of May already?? This year is passing insanely fast! There were a few posts I wanted to write this evening and so I thought I'd try to tie them all together into a big review post of the month of madness that was May and some about what I'm looking forward to over June  and July and thennn link up with Ellie's Things That Made Me Happy post because everything in this post is a thing that makes me happy.

Time and Place 8:02 in my chair in my living room. It is actually exactly the same time as it was when I wrote my monthly wrap up for April. I am nothing if not predictable.

Reading A lot. May was the month of the Re-Readathon and Bout of Books which both provided a lot of motivation! In total I finished eleven books and am part way through another four.

The books I finished were:

Scott Pilgrim's Precious Little Life and Scott Pilgrim vs the World by Bryan Lee O'Malley
Maine by J. Courtney Sullivan
Anne of Green Gables by L.M Montgomery (all for the re-readathon)
The Icarus Girl by Helen Oyeyemi
The Rehearsal by Eleanor Catton (both during Bout of Books)
Mrs Hemingway by Naomi Wood (Confession: Ellie, I already owned this and saw it on your wishlist so wanted to give it to you but also really wanted to read it myself so it has been very cautiously read by me first! Sorry!)
The Artful Parent by Jean Van'T Hul
Throne of Glass and Crown of Midnight by Sarah J. Maas
Saga Volume 2 by Brian K. Vaughan and Fiona Staples

Apparently I only actually reviewed one but oh my God so many book I loved this month! All the re-reads were massive winners and The Rehearsal was so incredibly good. And then Saga. Just still so good. If anyone wants to buy me volume 3 (and 4 and 5) for my birthday that would be totally fine.

I'm going to write about The Artful Parent at some point as well because it was incredibly inspiring. I think I convinced our librarian that she should take it out straight after I returned it too, so that's a win. While I'm getting around to it though, you should check out Jean Van'T Hul's blog of the same name here. Probably only if you're interested in kids or creativity or creativity for kids though.

Watching Glee, Glee, all the Glee. We hadn't watched any since Cory Monteith died and were stuck at the end of season 3 but we decided to buy season 4 as a treat to ourselves and then we got season 5 cheap on eBay and are part way through it. I feel like they did a good job with losing an actor part way through and I still have a soft spot in my heart for it. That said, I can see why it finished with much lower ratings than it started with. Obviously we're getting season 6 so we can finish it off and I think we'll probably keep all the box sets once we're done for a big rewatch in a few months. What can I say? We're big fans of anything musically inclined around here!

We also rewatched Into the Woods the other day, which I wrote about for Fairytale Fridays. God I love that film.

Blogging apparently I am still in love with blogging which is awesome. I've blogged a lot this month so I'll try to group the posts together to make it easier in case you missed anything!

Inspiration on Monday (TBR Tin and Resources to Inspire Creativity)
April Wrap Up
Re-Readathon
Five Things That Have Made Me Happier
Bout of Books
Some book awards to help fill my TBR with diverse books!
Armchair BEA (Intro, Graphic Novels, Characters, Book to Movie Adaptations)

Cooking Carbonara for the first time in years. It was incredible. We've also baked biscuits a lot this month. We have a big bag of cutters and Benji likes to get them all out and we have to make a biscuit in the shape of each cutter. His favourite are tar-is (tardis) and 'angul' (weeping angel). I feel like we're raising him well...

Loving Our garden! Every time I step out the door there are more potato plants! We honestly have about thirty, if they all do well I have no idea what we're going to do with all the potatoes! Anybody want some? :-p


Also loving it being warm enough to be outside a lot. We took a trip to the zoo (the big on 30 miles away not the little one we visit all the time) because we have a year long pass and actually managed to go on the safari bus this time which takes you right through the giraffe enclosure. It was pretty awesome. If you follow me on Instagram you'll probably have seen our outdoor reading tent made of curtains and bedsheets. One day we had sausage sandwiches for breakfast in it while reading stories. The boys loved it.


Anticipating So much! June is the month of everything! This week coming I'm taking part in the #TBRTakedown (announcement video here). There are five challenges which are: 1. A book that's been on your shelf more than a year, 2. The first book in a series, 3.An unread sequel 4. A book outside your comfort zone, 5. A book from your most recent haul

Mine fit the bill from top to bottom, the top being 1, the bottom being 5. Crown of Midnight is being replaced by Heir of Fire though, as I finished it today! 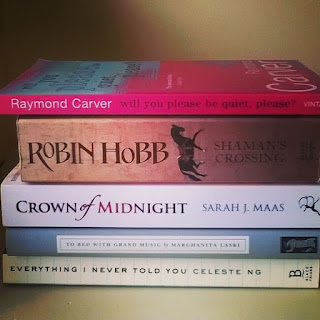 Also starting this month is Allie's Victorian Celebration. Although I'm not going to be starting it until the second week of the month at the earliest I have plans for a Charlotte Bronte - probably The Professor or Villette - and an attempt at finally starting Middlemarch. We'll see.

Non-bookishly I'm also taking part in The Wildlife Trusts' #30dayswild challenge. Pretty much what it says on the tin; do something 'wild' every day in June. This can be as small as taking a walk in a wild place or photographing a butterfly. I'm looking forward to it.

******Fundraising Update******
It's now been over two months since I last bought a book for myself or the boys! I'm reading from my own shelves and loving it. I still have about £30 outstanding (grrrr come on family!) sponsorship from the Readathon but I'm at £118.45 of my £300 target by December. If you'd like to support me by donating to Beanstalk and helping children's literacy programs around the country you can do that here or you can see the books I'm currently selling in aid of the charity here.

What did your May look like? Did you read anything great? Go anywhere amazing? Watch anything I should have seen? Tell me about it!